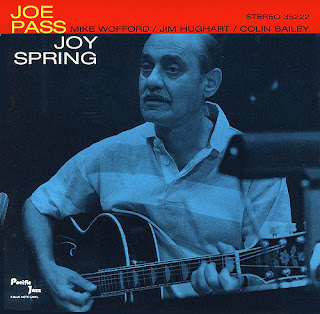 I remember several discussions on RMMGJ about what people thought is the best recorded jazz guitar sound ever. Though the answer to this question seems fairly subjective, it was surprising how many guitarists named Joe Pass' sound on "For Django" and "Joy Spring." These albums - not suprisingly on my desert island list - were both recorded in 1964. At the time Joe was playing a Gibson ES 175.

Apart from the classic ES 175 jazz sound, the album is a personal favorite for many jazz guitar players. And rightly so, jazz guitar does not come any better than this. Here's the title track:

It is amazing that Joe recorded a second album in the same year that has received similar status. This time a live album. Same great guitar sound. Same great playing.

And a few later Joe Pass albums that capture the perfect bop sound are "Intercontinental" and "Simplicity."


Another classic guitar sound that I greatly dig is Tal Farlow's. How woody can a guitar sound? Tal has a bit more attack in his sound. Especially on "The Swinging Guitar of Tal Farlow (1956) it is beautifully captured:

In the end all great players sound great on their instruments of course, but these two guys stand out for me personally.
Posted by Dutchbopper at 10:09 AM

Email ThisBlogThis!Share to TwitterShare to FacebookShare to Pinterest
Labels: best bop sound ever