Years ago I recorded a video that became my best viewed ever. I played 3 Parker tunes on guitar unisono with Bird. I had studied these from "Jazz Guitar Solos. A study of great horn solos arranged for guitar." 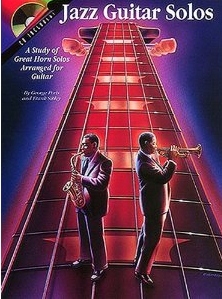 At the time I posted it on my Jazzerman Youtube account and it generated thousands and thousands of views. Nowadays seeing a guy play guitar on the Tube is pretty common but in those days there weren't that many guys that did that.

Playing Parker on guitar isn't easy. It involves some hard fingerings and fast triplets and the tempi are often way up. Here's another unisono vid on the head of "Confirmation." For the sake of playability I simplified a few triplets.


Later I added some animated sheet music to "Bloomdido", which was part of the original Charlie Parker on Guitar video. Probably the hardest of the 3 Parker solos. Looks cool huh ...

Email ThisBlogThis!Share to TwitterShare to FacebookShare to Pinterest
Labels: Charlie Parker on guitar