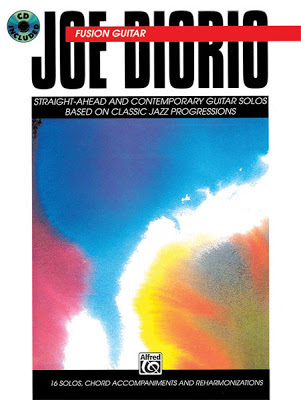 In the past I have studied some solos from Joe Diorio's book "Fusion Guitar." In this book Joe constructs 16 modern and ultra-modern jazz guitar solos over eight classic jazz chord progressions. The book only has standard notation but here's a few tabs of three etudes on the chord progressions of "All the Things You Are", "Stella by Starlight" and "Blue Bossa." In the book they are not mentioned under these titles but bear such titles as "modern swing solo" and "Bossa Nova solo" etc. Unlike the title of the book suggests, there's lots of straight-ahead sounds to be discovered in it too. You will find the tabs under the vids. They are included in the vids as well.

Posted by Dutchbopper at 6:27 AM