After the Jesse van Ruller interview it is now time to highlight yet another great jazz guitarist from my country. Like Jesse, I have followed Martijn van Iterson since somewhere in the mid nineties. They both studied with Wim Overgaauw and graduated from the Hilversum conservatory at the same time. Come to think of it, it is really amazing that both such enormous jazz guitar talents emerged roughly at the same time. Sure there are a number of fine Dutch jazz guitar players that have enriched the jazz scene since then but these two ... are still somethin' else. IMHO.

Over the years I have met MVI several times and have seen him play often. Like Jesse, he is a world class guitarist. He has won several jazz prizes and is a prolific and talented composer as well. He has two excellent CDs out: "The Whole Bunch" and "Streetwise." The clip above features him in a church, playing a ballad.

For earlier Blogs and more live vids of this great player click here and here. For a must-see compilation video of MVI solos go here. And now let's go to the interview. 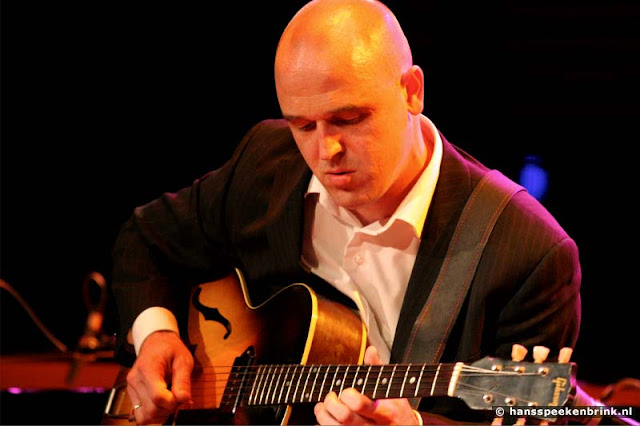 You picked up the guitar at 9 and were already playing jazz with fine musicians at a jazz café in Leiden at a young age. What made you decide to study jazz at a conservatory?

Well, it wasn't like I clearly decided to become a musician. I just could not imagine myself doing anything else. At about age 17 I played together quite often with musicians who were already studying at a conservatory. Their stories about it encouraged me even more to try to become a professional musician. So I finished high school as soon as possible and went for it. 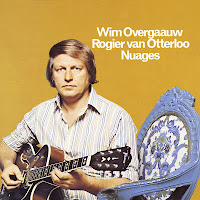 We would just play a lot of jazz standards and dig really deep into them harmonically and melodically. Apart from all his musical knowledge, his dedication to being a jazzmusician inspired me a lot. I think half of all the lessons I’ve had with him we spent in a café around the corner just talking about music and his experiences while having a coffee.

Do you remember certain practice routines that you stuck to when you were studying?

No. I’ve never practiced according to any schedule. I always just picked up my guitar and after I was warmed up, I started playing anything. If I would meet a limitation while playing, I tried to improve myself on that. But I never forgot to just have fun practising.

What guitar players besides Wim do you consider a main influence when you were a student?

At that time Metheny and Scofield were the most influential ones. But over the years I’ve been inspired by all the good ones. I’ve been into Jim Hall, Wes Montgomery, Joe Pass, Pat Martino, George Benson and many more for longer or shorter periods.

How did you develop your single note playing?

Mainly by listening to “single note” instruments like saxophone or trumpet a lot. I checked out all the good ones again. Coltrane, Getz, George Coleman , Ferdinand Povel , Woody Shaw, Tom Harrell and many more.

And how did you develop your chordal playing?

Wim Overgaauw was very good at  playing chord melody arrangements. That also has been a main subject during his lessons. And also by listening to harmonic piano players like Bill Evans or Herbie Hancock for instance. I checked out the substitute changes they used. I remember I tried to translate piano voicings into guitar voicings.

I remember reading somewhere that you have been working hard on your trio playing over the last years and that it has taken you some time to feel confident in that format. How did you work on this?

I have practiced chordal improvisation quite a lot lately. It’s different from a prepared chord melody. Before that I was focused more on single note improvisation. It took me a while to integrate chordal improvisations into my playing in such a way that I was more or less satisfied about them.  I really searched for the right balance between those two and tried to make the transition from one into the other sound as natural as possible. But I’ll always be frustrated about the fact that I can’t comp myself like a piano player can.

You have a really strong and articulate time feel. Was it there to start with or did you develop it over the years?

I’ve been asked that many times. I guess for the main part I was just born with it.  And after that it was a matter of getting out technically what was already present in my ears. Singing drums or “human beatboxing” helped me  too.

Do you pick all notes or do you play legato?

I try to make the legato sound as if I pick all the notes.

Do you still have time to practice these days?

Not as much as I used to. But luckily there still is some. Mostly at nights when there are no other distractions. 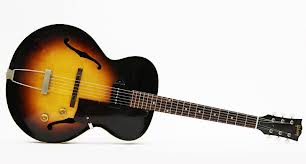 Most of us know how you got the Gibson ES 125 from Wim. It seems to be your main instrument. Did you never feel the urge to try out other archtops?

I’m always interested in other guitars and have tried a lot of them over the years. From students, at vintage stores, from custom builders etc.  But I simply  haven’t played one yet that could replace mine. Also lately I find it harder to switch to one of my other guitars because it takes me longer to get used to it. The 125 has become like a body extension to me. As soon as I pick it up it feels comfortable, like driving your own car can be.

What exactly is it that makes you so fond of this guitar?

Because it still inspires me so much. It sounds great both acoustically and amplified. The P90 single coil pickup is still one of the best according to me. It is a very stable instrument too, not bothered by weather conditions. There are hardly any weak spots throughout the neck. It is easy to play. I like the size, scale and shape of it too. And last but not least, it really returns the energy I put into it while playing it, in a way I didn’t feel on another guitar yet. 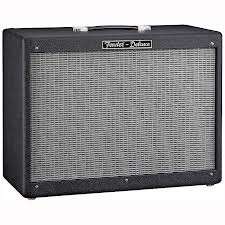 Yes, I’m using a Fender Hotrod Deville "2x12”.  It's suitable for most occasions. It’s not too heavy to carry to gigs. Sounds warm. I like the “plug and play” principle. I try to not to be bothered by the amp I’m playing on or by the room acoustics.

You often play acoustic jazz. Is that your favourite style?

Jazz is my favourite style! I mean, as long as there’s enough space for improvisation I’m okay with it. So the instrumentation or style is not that important to me. I just happen to play in acoustic settings the most  lately. 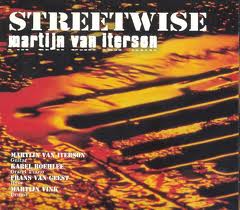 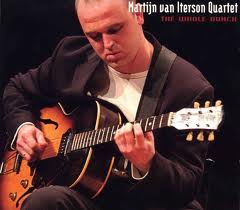 “The Whole Bunch” and “Streetwise” are excellent albums. When is the next album coming out?

Thanks for the compliment! I’m planning to release a new quartet album this year. By now I have enough material again for a new one. I’ve had to deal with some major personal life events over the past few years which kept me away from doing my own stuff . Currently I’m also recording a duet album with a singer in our spare time. We’re trying to have it released this year too.

Holland is worldwide known for its water management so that must be it! Apart from Wim’s major contribution to our development I think jazz education in general here in Holland is at a very high level. Thanks to all the first generation Dutch jazz musicians who founded the jazz departments at the conservatories in the late seventies.

Do you keep in touch with the jazz scene in the USA?

Not really, I visit NYC once every decade for fun and inspiration. Altough I’d like to visit it more often.
But I’ve met and played with quite a lot of American cats here in Holland.

Personally, I’d love to see you and Jesse together at the Crow with a great rhythm section playing a few sets of standards. Is that something you would dig? (still have to ask Jesse though …)

Of course I would dig that. But that’s going to be very expensive!

Thanks for the interview Martijn!

Posted by Dutchbopper at 5:58 AM