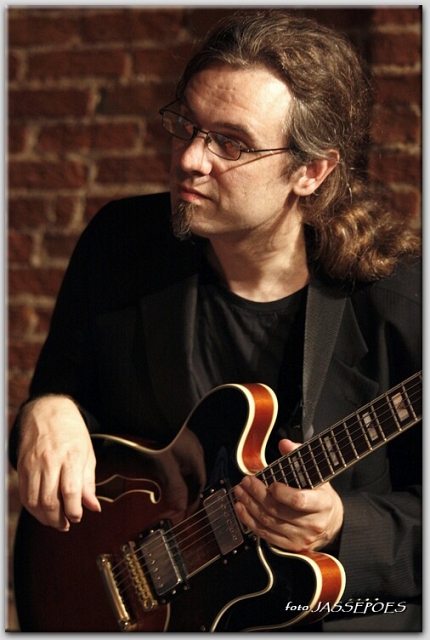 Since 1998 Danish born Jens Larsen has been active as a guitarist in the Netherlands. He studied at the Royal Conservatory in the Hague and graduated in 2004. He is active in several bands of which Traeben, an international jazz quartet, is probably best known. They released their second album “Push” on October 1 last year and their music has received some fine reviews. Time for an interview!

I started playing guitar when I was twelve. I had classical guitar lessons and was a few years later getting pretty serious about that. I was not sure if I should try to apply for the conservatory or do university. I ended up choosing for university and studied mathematics and IT in Århus.

No I did not start playing jazz until after I finished university.I sort of ended the study with a bachelor having the ambition to learn jazz. At the time I was mostly playing electric guitar and really learning a lot of Jimi Hendrix, Stevie Ray Vaughn and Pearl Jam. I then found out that I really liked Charlie Parker's stuff and also some of the Scofield Quartet with Joe Lovano, probably because it was very bluesy it made sense to me.

You studied at the Royal Conservatory in The Hague. Do you recall a particular practice routine when you were a jazz guitar student in the Hague?

I did not have any real routine, I did at times study technique or other things very structured, but I was also always just playing songs a lot, and playing with other students as much as possible. To me conservatory was a place to play, time to practice and teachers to learn from. I learned as much from playing with people as I did from practicing and having lessons.

With whom did you study? What were your lessons like? What did they focus on?

In the beginning Eef Albers and Peter Nieuwerf, later also Wim Bronnenberg. I think I probably had lessons in almost anything jazz related during my study, sometimes I'd choose a subject for some time, other times I would get assignments from the teacher. Another teacher that I learned a lot from is Bjarne Roupé who is a teacher at the Conservatory in Copenhagen. He taught me a lot of solid basics about playing changes and also helped open my ears to a lot of things.

Which jazz guitarist(s) had the most influence on your playing in those days?

Probably Kurt Rosenwinkel was the biggest influence on me, his approach to guitar and ability to sound like he is rooted in tradition and at the same time innovative was always very impressive to me. I also learned more than an album full of Wes solos, almost the whole of Smoknin at the Half Note and a few others. Just before I started conservatory I had worn out “Lorne Lofsky's It Could Happen To You” album.

When and where did you start doing jazz gigs in the Netherlands?

I started playing gigs in Holland when I was in my 1st year of school, mostly comping singers in Cafe's etc. Then I was part of the house band for a jam session for a few years in Musicon in the Hague. The bandleader was Rene Winter. I've learned really a lot from him and checked out a lot of stuff together with him. From my 4th year I had to make a living playing, since I'd already done another study. Later I also started to teach.


And when did you start composing?

Composing and improvising music was something I was doing right from when I started playing. I just did not really know I was doing. It was just having fun and exploring, and sometimes I'd end up with small compositions.

Do you make a living playing and teaching jazz guitar?

Well I don't exclusively play and teach jazz, though it is probably what I do best. I play most gigs I get asked to, and often it is nice to learn other styles of music. I like the variation and different challenges.

Being a guitarist I prefer playing to teaching, but at the same time I really like teaching, it is fun to pass on knowledge or figure out how to explain or demonstrate a skill to a student. It gives you a deeper understanding of the things you teach.

How would you define your own style? Bebop, mainstream, contemporary?

I don't know, I hear so many things in my own playing, I guess it's better to let other people describe it. Though I have been reviewed as sounding from Barney Kessel to John Scofield and pretty much everything in between. Eyes or ears of the beholder I guess...

What bands are you in currently?

I am in a lot of different bands, some are active now others are on hiatus. The band with the most work is Træben, where I also write a lot of the music. We're starting to get recognized a bit more, and things are happening, among other things we are playing in Denmark and have a tour in Canada. We've also been on TV in the Netherlands. Others include Wijnen, Winter & Larsen, Wild Bill, Yvonne Smeets Quartet, Jazz4kids, Jan Verwey Quartet etc. etc.

Could you mention some highlights in your jazz career?

The concert with Michael Brecker in the Hague in 2003 comes to mind and also playing at North Sea was fun to try. For Træben to play at Vrijge Geluiden was a big event I guess, and also that we are beginning to reach outside of the Netherlands feels very good.

What recordings that you made do you like especially?

I am really proud of the latest Træben album “Push” since it is a lot of my own music. It is also really nice that it has been received so incredibly well by press and audience alike. That said I never really listen to my self, except if I want to figuring something out that I want to develop or change in my playing. 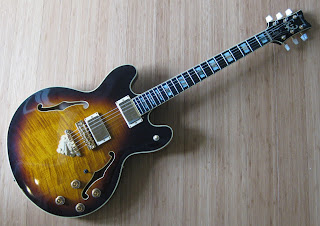 I am using an Ibanez guitar, it's an Artist 2630 model. I am using a fractal AxeFx Ultra through a QSC K10 for amplification and effects. I really like the flexibility of that setup, both the guitar and the AxeFx are very flexible tools for a wide range of playing situations.

I don't have a specific approach, I try to find a way that works for the student, taking into consideration the skill level and experience with other genres. I don't believe in complete methods fro teaching, but I do have a set of options for teaching a lot of specific skills.

I just got the new Kurt Rosenwinkel cd “Star of Jupiter” which is great. I've also been listening a lot to the latest Billy Hart cd and Haye Jellema (the drummer of Træben) kept going on about Rudder so I've listen to that band a lot too lately

I check out the forum at jazzguitar.be quite often, for the rest I just look on youtube.

The one with Pat Metheny warming up is always scary and inspiring at the same time because he makes scales and arpeggios sound like good music.


Who are your favorite Dutch jazz guitar players?

I was lucky enough to have some lessons with Maarten van der Grinten while I was doing my masters and he is maybe one of the best musicians I've ever played with. That was so much fun, and his ability to communicate while playing is fantastic. He also has a really wide set of approaches to comp and solo, to me he is a little overlooked here in the NL. Anton Goudsmit is also a favorite, for much the same reasons, I never played with him or had lessons from him, but I really like his playing.

I am busy writing music for the next Træben album which we will record in the autumn and it will be released in 2014. We are of course busy with booking concerts for the next year or so. A tour in Denmark in 2014 is coming up, and Germany and Eastern Europe is also in our sights. The tour in Canada in July.

You're welcome, I am always happy to talk about jazz, music and guitar! And I am also grateful that you are interested in my music and me.
Posted by Dutchbopper at 3:30 AM