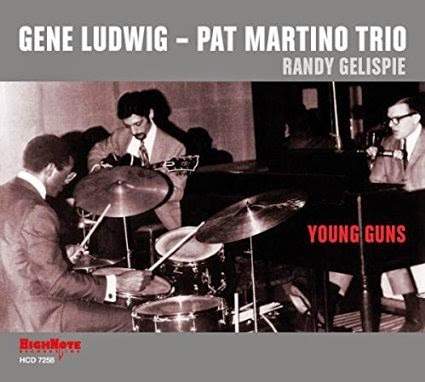 I'm about a year late on this one but this album is so incredible that it should be heard by every jazz guitar lover. "Young Guns" features a compilation of live tracks recorded in 1968 and 1969 at a burning club date in Luisville Kentucky featuring Pat Martino in an organ trio with Gene Ludwig on Hammond and Randy Gelispie on drums. The recordings stem from Martino's private collection and were cleaned up and released as an album only last year. Pat was and Randy were in their early twenties and Gene was about thirty. Vintage Martinoisms rescued from obscurity ...


The sound of the album is acceptable at best, but we should be grateful in the first place that a tape recorder captured these musicians in their prime over 40 years ago. Vintage Pat Martino tearing it up in an obscure jazz club in the late 60s. It just does not get any better!

His solo on Mr. PC is flabbergasting. You want to play it? Transcription included. Mmmm .... maybe not :)

And here's two more tracks to enjoy. Click here to get the album.
Posted by Dutchbopper at 12:04 PM