Frederick William "Freddie" Green (March 31, 1911 – March 1, 1987) was an American swing jazz guitarist. He was especially noted for his rhythm guitar playing in big band settings, particularly for the Count Basie orchestra, where he was part of the rhythm Section" with Basie on piano, Jo Jones on drums, and Walter Page on bass. His comping style can be explained simply as: "hold down a chord with the left hand and strike the strings with the right hand on every beat of the tune." The voicings that were used by Freddie and other rhythm style players primarily used basic 3 or 4 note voicings without extensions and alterations. You can see a few here: 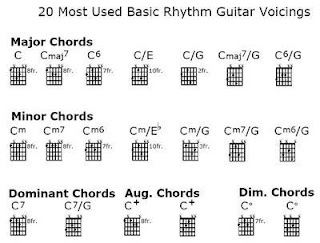 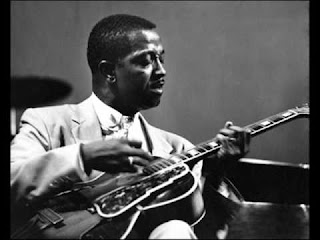 A big issue in style of comping is volume and sound. You need a sound that does NOT muddy the sound of the bass player. And the volume should be so low that the guitar is rather "felt" than "heard." The sound should be acoustic rather than electric and it is essential to avoid boominess.

I found a few good tips by Tim berens on freddiegreen.org on time, volume, sound and voicings. His page is a must for everybody interested in the style. Some quotes:

Rhythm guitar is about time, not about voicings. Voicings are a detail, but they seem to take up a great deal of space in discussions about Freddie Green comping. If you are just learning the basics of swing rhythm guitar, pay little attention to the discussions of voicings. I suggest that to learn this style you should first concentrate on time.

A big issue with Freddie Green comping is the volume: how loud should it be? The answer is just loud enough. Not particularly helpful, but completely accurate. Here are things to consider when deciding how loud to play:

The realities of most live performance dictate the use of an amplifier. But the typical amplified jazz guitar sound is too "thick" to properly play Freddie Green comping. The big fat jazz box sound will simply muddy up the rhythm section because it will interfere with the bass player's lines.

Do not get obsessed with voicings as a beginner. Remember that you do not have to play voicings exactly like Freddie Green to play good Freddie Green comping.
Here are several guidelines for voicings:

By no means am I an expert in this field. I am still working on a good swing feel myself in this style - and that IS hard - but I did make a short instructional video on how you can apply some common voicings on "There Will Never Another You." I keep the bass note on the 6th string all the time and I use some substitions for certain chords to keep voice leading going. Have fun!

And here's "Fly me to the Moon" in the same style:

Trying out some ES thinlines 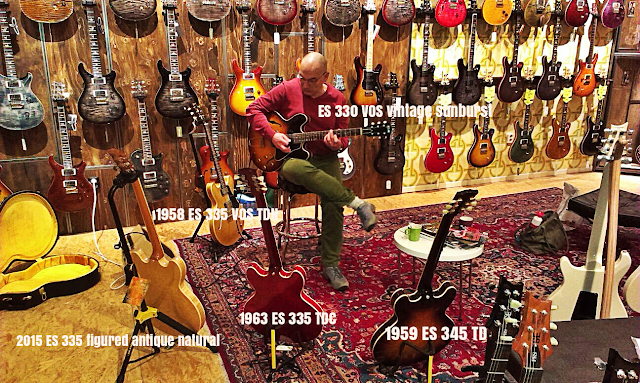 A few weeks ago I visited Dijkman muziek in Breda. I had seen they had both a used reissue Gibson 1959 ES 330 TD and a used 1958 ES 335 VOS for sale and I had always wanted to check these two out. Especially the 330 I was interested in. I first called the store to ask if the used 330 (built in 2012) had the unpopular (two piece) laminate fretboard that Gibson applied in 2012 due to legal issues. I had heard bad things about those layered fingerboards and though I don't know if these rumours are true I simply do not think they belong on a 3k guitar. But the store assured me the ES 330's fingerboard was not layered and told me they had made some enquiries with Gibson even. Mmmm .... OK for now.

I took my trusted ES 175 to the store so I could compare the sounds of the thinlines to my 175. Of course that comparison is not really fair but still ... I thought it would be interesting to see how the full hollow thinline ES 330 would sound compared with a full sized ES guitar . I had also taken my Mambo amp through which I played them all. 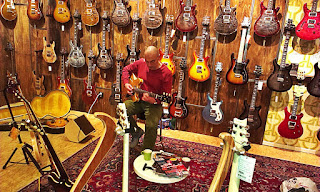 After playing the 1958 VOS, the regular 2015, a reissue 1963 ES 335 TDC and a reissue 1959 335 TD, I had to conclude there was not that much difference to be noted sound wise. They all sounded like a 335 does. I think I liked the 1963 TDC somewhat better but, like I said, the major differences were cosmetic only. Apparently there is a market for VOS made Gibson guitars but personally I would not pay the premium prices these instruments demand. Heck, they ARE expensive at 4-5k euro. 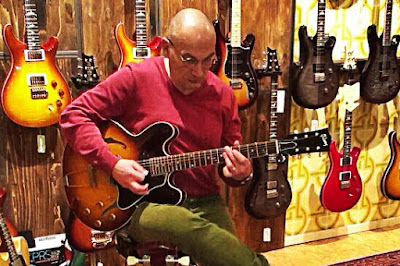 And then I got to the 1959 ES 330 reissue. I was pleasantly surprised. It was a lightweight guitar with a more traditional jazz sound than what I heard from the ES 335s. With way more acoustic volume, because, obviously, the 330 has no full center block like the 335. The full hollow body has mahogany sides, a mahogany tailblock and headblock (so not full) and a 3-ply maple/poplar/maple top and back. A notable difference with the 335 is that the neck of the 330 sits further into the body, joining at the 16th fret. This creates a shorter guitar with a different feel. The 335 has better playability in the higher positions therefore. The neck of the 330 was a bit too clubby for my taste but I guess I could get used to that. The sound I found pleasing enough. A nice traditional jazz sound. I could not find a decent demo for the guitar (nobody plays jazz on jazz guitars in demos ever ... sigh) but here you can see and hear it:


I have to admit, none of the thinlines, including the 330, produced such a woody and classic jazz sound as my 175 but you can hardly expect that from a thinline of course. Still, the 330 is closer to what I want to hear in a jazz guitar than the 335. That does not mean the 335 does not work for jazz, many great players prove otherwise of course. But I would rather use the 330 for that with its hollow body.

Now for the bottom line ....  I think the  ES 330 will make a great guitar for straight ahead jazz. No doubt about it. It does not really sound like you hear on Grant Green recordings of course (Grant used very unusual EQ settings on his amp) but it is easy to get some cool bebop sounds from the ES 330. Definitely one of the cooler thinlines in the Gibson stable and it does have that cool vintage look with the slightly dulled finish, the P90s and the vintage Mickey Mouse horns.