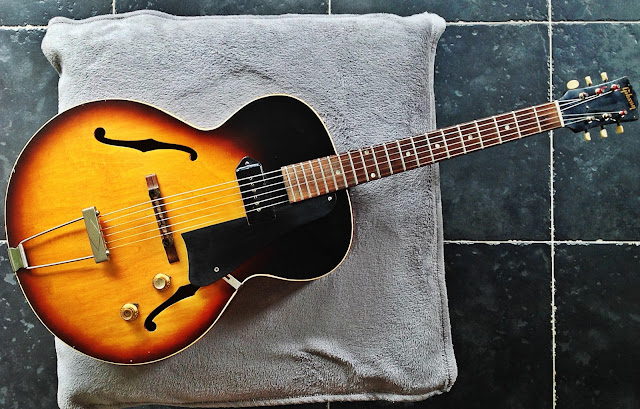 In my previous post I reported on my guitar trip to Amsterdam. I stated that I liked the 1964 Gibson ES 125 best. Sure the 1997 L5 I played was great, and the Byrdland too but ... I tend to relate the attractiveness of a guitar to its price these days. In my view,  if a recent 6k archtop sounds great that is hardly impressive. For, it would be a disgrace if it did not. But if an archtop is AND vintage AND sounds great AND is sub 2k euro, well, than that IS impressive. So a week after my trip I made an offer which was accepted and returned to the String to get that 1964 Gibson ES 125.

I have owned a 125 earlier. Actually in 1998, a 1951 ES 125 was my first vintage Gibson archtop. I gave it to my daughter years later and I sold it for her about 10 years ago when she needed some money. She always regretted selling that guitar though  ... so she was happy to accompany me to Amsterdam to get another one.

The ES 125 is the most humble of vintage Gibson archtops. It's not very collectible because so many were produced and so many are still around. After all, it was highly successful model for Gibson from 1941 to 1970. Simply because it was so affordable.  "A student model at best" I read on the vintage guitars info pages. So you won't find in the orthodontist's or lawyer's guitar collection. It has no snob appeal. However, in terms of affordable vintage mojo a 125 is hard to beat. Over here in the Netherlands the instrument has gained popularity ever since chops meister Martijn van Iterson chose it as his preferred instrument in the 90s. There is nobody on the planet that plays a 125 better than he does, trust me. And his sound is always fantastic. Student model at best huh ... 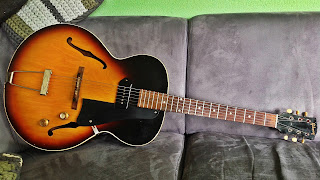 The playability may not be what you find in high end guitars. But make no mistake. It IS a vintage instrument. It is of a much lighter build - so with a thinner top - than current Gibson laminates. An ES 125 will be more resonant than what you would expect. Its acoustic sound is pretty loud. Kind of like what you hear from ES 175s of the late 1940s and 1950s, you know the ones with a single P90 pup. Here's a clip that I recorded with my 125 totally unplugged. The tune is "Angel Eyes."

My 1964 ES 125 is very much like the 1951 one I once had. I kind of like my current one a bit better cosmetically because it has a lighter three tone burst instead of the older two tone burst of the 1950s. But for the rest, pretty much the same guitar. Definitely feels the same but it may sound a bit brighter than the older one I had. I do not know much about the consistency of them over the 30 years they were produced though ... Most of the ones I see on the internet seem to be from the 1950s.

And here's a clip that showcases its electric sound (Kenny Burrell's "Midnight Blue"):

Typically, you can find a vintage 125 for under two grand. I paid 1800 euro for mine. It does have some fret issues high up the neck so I will have to spend some 150 bucks more. Most of the times that will be the case for these guitars. You'd be lucky to get one with new frets that is already in perfect playing condition. Many are pretty battered. I wonder how long the sub 2k prices will remain though. Prices ARE going up for this model.

The ES 125 is not for those that seek a shiny new guitar. The finish on these is thin in vintage style. Heck, most recent guitars will feel like plastic compared to the woody vibe the 125 generates in your hands. I love that feel. I think these old finishes (or rather, the absence thereof) really improve the sound. So if you want an affordable full sized vintage ES guitar, the Gibson ES 125 is your best choice. And your only one probably ...

Posted by Dutchbopper at 1:42 PM

Email ThisBlogThis!Share to TwitterShare to FacebookShare to Pinterest
Labels: The Gibson ES 125