By the general jazz community Joe Pass is probably best known for his incredible solo jazz guitar playing. In the mid 1970s he recorded a number of solo albums in chord melody style, using extensive use of walking bass lines and melodic counterpoint. He did many solo performances too in those days. His playing displayed sheer virtuosity and has been the standard of solo jazz guitar playing ever since.

Still, my favourite Joe Pass material was recorded more than a decade earlier. Let's listen to a few tracks that were recorded in the early sixties. Notice that Joe was playing a Fender Jaguar in those days. After that you can listen to a few tracks of my 5 favourite Joe Pass albums that were all recorded in the  1960s. They appeared under the Pacific Jazz label. 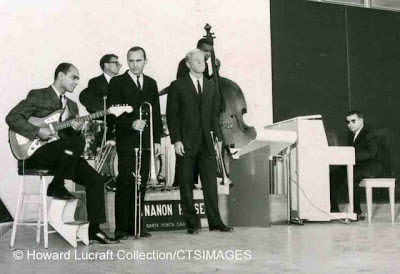 In the 1950s Joe's career was cut short by his drug abuse. In the early 1960s he entered a drug rehab program at Synanon. The album "Sounds of Synanon" that was made in 1962 by a band consisting of inhabitants of the alcohol and drugs rehabilitation-centre meant the definite breakthrough of Joe Pass as a guitar genius. Joe was not playing his ES 175 yet.


The following vid shows the band of that album playing live in 1962.

In 1963 Joe recorded an album with Clare Fischer on organ and piano. The album is "Catch Me."

In 1964 he recorded which is - according to many - his best album ever "For Django." Here's the title track.

In the same year he recorded a live album "Joy Spring" that is perceived as a classic too.

An album from 1967 called "Simplicity." Though it was probably conceived as an "easy listening" album it's still pretty outstanding!

Posted by Dutchbopper at 7:44 AM