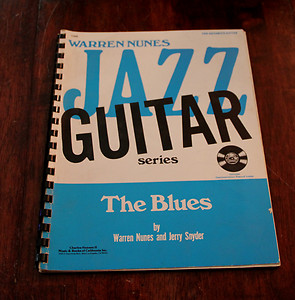 One of the first jazz guitar books I ever studied was "The Blues" by Warren Nunes. Must have been in the early eighties, long before I ever got serious about jazz. I borrowed it from a friend and learned my first basic jazz blues progressions from it. And probably my first jazz solo too, called "True Blue." The book is from the 70s. It was the time of record players and it had a plastic record (flexidisc) in it with some backing tracks over which you could solo. I actually found it on the Tube again! Nostalgia! Listen:

Here are some basic blues progressions in Bb and F that I took from this book. The book has probably been out of print for years. But I still use these progressions. Still remember the licks too. In the vids you can see which chords I am playing. Here we go:

Another basic blues in Bb

Another modern blues in F

Posted by Dutchbopper at 1:39 PM

Email ThisBlogThis!Share to TwitterShare to FacebookShare to Pinterest
Labels: the blues Warren Nunes