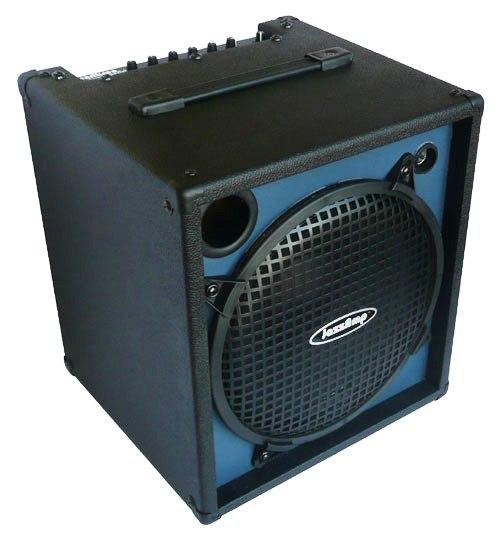 I have been on a quest for a small and leightweight jazz amp for some time now. I have owned a Polytone for many years and have tried out several other amps by Ibanez, AER, ZT Amps and Roland (see other posts in my Blog). None of them struck me as better than what I have been playing for years, a Polytone Mini Brute IV.

I have been reading rave reviews of the Henriksen Jazz Amps on the internet for several years now but never had a chance to play one myself. The stores in my area do not carry them and probably would not know about it anyway. In fact, the only store in the Netherland that is importing them is Casa Benelly, which is in The Hague. I am most grateful to them for allowing me to test drive it for a few weeks and to finally enable me to write a review on it. I'd like to thank Toon Evers from Casa Benelly and Aug Oddens from Casa Benelly Import for their help.

The first thing that struck me when I unpacked it was that it was slightly bigger than I thought it would be. It is not THAT small and THAT light. I had asked for the Jazz Amp 112, which carries a 12” speaker so, as I realized quickly, it cannot be anything like the AER Alpha for example. But my old and trusted Polytone Mini Brute IV is even slightly bigger and heavier, due to its 15” speaker. The Henricksen Jazz Amp 112 ER (Extended Range) weighs 35 lbs and its size is 14" x 15 " x 13". That makes it reasonably portable but hardly the lightest and smallest amp around of course.

According to its makers, the idea behind the Henriksen Jazz Amp is that it will reproduce your guitar’s sound faithfully. The presumption is that the amp should only make the sound louder but not alter it. Therefore the conventional tone circuitry has been eliminated completely and instead a 5 band graphic EQ was added, not to color the tone but simply to adjust the amp to the environment the guitar is played in. You can increase or decrease any of the 5 bands by 10DB. It is claimed the EQ does not affect frequencies outside its band so that the amp remains “un-toned.” Well, I did not really measure this of course so how true this is I will leave up to more technical reviewers.

The ER in this model stands for “Extended Range.” The 5 band EQ goes from 100 to 10Khz, due to the fact that it carries a Tweeter (that you can switch on and off by the way). This makes it the most versatile amp in the Henriksen range of models. You can even play a string bass or flattop through it, switching the Tweeter on or off according to the required sound range.

It’s a simple amp. It has a 5 band EQ, an input, a line out, a, Tweeter and reverb (with on/off switch) and an extension speaker jack. The fewer knobs, the better in my book. The reverb is so so by the way but good enough for me. 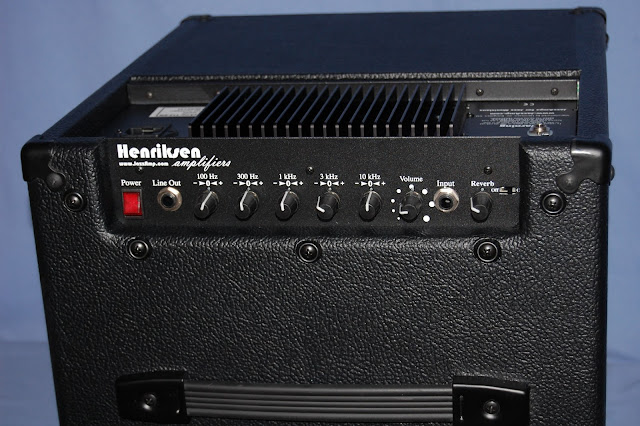 Now to the crucial question. What does it sound like? First of all, I liked the sound best when the amp was placed on the ground. You get a much better bass response then. With all EQ flat the sound from this amp is … well, classic. You get deep lows and a warm and mellow sound easily. At home getting a fantastic tone  is absolutely just a matter of plugging in. Probably the best jazz sounds I have gotten so far from my guitars. I never seriously used any EQ by the way, nor did I switch on the Tweeter. I do not like tweaking sounds. In the next video I am playing "Love for Sale" through it using the line-out:


I took it to the Crow for a jam session and there I did have to tweak the sound a bit to cut through. But the amp had no problem whatsoever with the higher volume. It shouldn’t because it is said to deliver 120 watts. Still, you will need to experiment a bit with the EQ settings to adjust to the room and to retain the amp's mellowness. Because I did not have time to properly experiment in different live situations, I kind of preferred the sounds I heard at home but I am sure louder gigs are no problem for this amp and if you take the time to experiment with the EQ it WILL work on any stage. I am not sure the Henriksen beats my Polytone in louder settings though.

By the way, the line-out is very practical when there is a sound system around. It works great and delivers a tone, actually more or less like the speaker does. Warm and mellow. Listen:

So do I like this amp? Heck, yes! Especially for those that seek a classic and mellow jazz guitar tone from a smaller combo amp that can handle most stages, this might be a really attractive and affordable alternative. In my quest until now, the Henriksen Jazz Amp 112 ER definitely takes the top position sound wise in lower volume settings. It just sounds sweet and lovely. In the following clip I recorded my Gibson Tal Farlow through the amp with my camcorder standing a few meters from the speaker. The vid shows 3 improvisations on the progressions of "Body and Soul", a "Minor blues" and "Tangerine." It's a bit lofi but I think the vid gives a good idea what it sounds like.


You can compare the Henriksen with my Polytone in this clip of "Pent Up House", which was recorded in the same way. I find the sounds not totally different but you have to bear in mind that my Polytone has a 15" speaker whereas the Henriksen carries a 12" one!