I hate schlepping big amps. Traded in my Fender Twin Reverb for a Polytone Amp 16 years ago. I have been using my Polytone Mini Brute IV ever since. So the one with the 15" speaker and spring reverb. Lots of headroom, lots of bass response, lots of power. You can play any jazz gig on any stage with it. I like its classic mellow jazz guitar sound a lot. Vey sturdy and reliable. It has never let me down. 110 watts at 15 kilos. Sized 47 x 43 x 27 cm. The one to go for when headroom is required. The Polytone is a pretty small amp, but not extremely small. At least IMHO. I'm sure a rock guitarist would disagree with me here ... 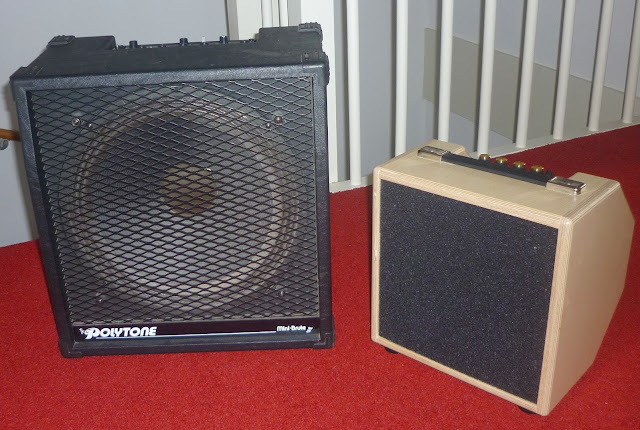 But the Mambo 10 I just purchased is a lot smaller even and almost half the weight of the Polytone. You can see that in the picture. This is the one I will be using for rehearsals, jazz jams and low(er) volume gigs when headroom is less an issue and portability is. Which is often the case with me. For, I simply do not like schlepping amps around. I told you that earlier. The Mambo 10 is extremely portable but loud enough to handle most jazz situations without sounding boxy. 180 watts at just 8 kilos. Size only 30 x 30  x 25 cm. The size/weight/sound ratio is unequalled. Is it a compromise? Yes. Usually, bigger amps sound better than smaller amps. So any really small amp is a compromise. But the Mambo is tiny and still sounds good and pretty mature. And the truth is I just will not carry big amps around anymore, no matter how good they sound. Amp size DOES matter to me. A lot.

So I think my jazz amp story kind of ends here. At least for the coming years. Good enough is good enough.
Posted by Dutchbopper at 10:29 AM 2 comments:

Jazz Guitar Night at the Crow 2013 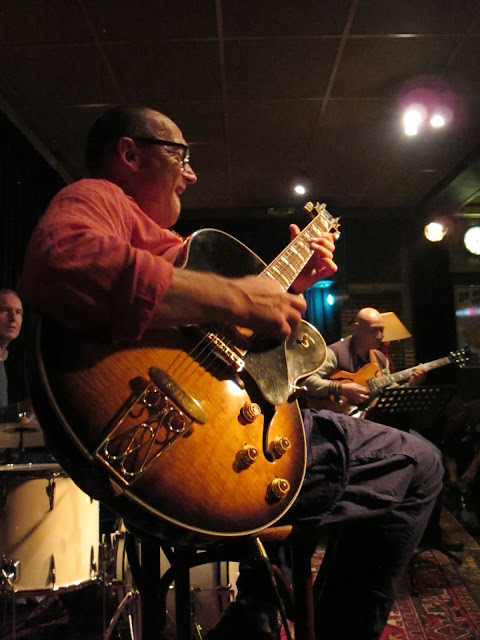 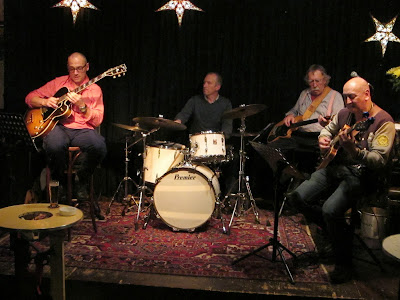 I have been organizing "jazz guitar" nights at cafe Kraaij and Balder (the Crow) for years. Usually local jazz guitarist (and my former teacher) Herbie Guldenaar joins me with a rhythm section consisting of bass and drums. In the past other guitarists from my internet network have joined us on several occasions too.

This year's issue took place on october 25 last. Contrary to our normal routine with only one or even no rehearsals at all, we decided to do 4 rehearsals so that we could transcend the "jam session level" a bit and add a few less heard standards like Pat Martino's "Lean Years", Freddie Hubbard's "Up Jumped Spring", "This I Dig", "Grooveyard"  and even an original ballad by Herbie Guldenaar. This idea proved a lot more satisfactory. What just a few rehearsals can do ... 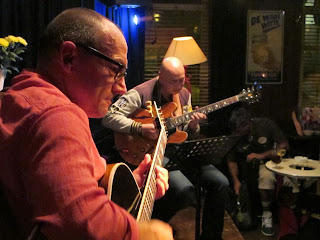 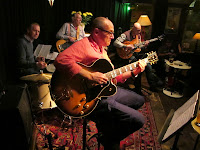 A nice feature of the jazz concerts jams at the Crow is that they are filmed so that people can follow the live stream via the internet. The quality of the image and sound is so so, but it kind of adds a nice flavor to the shows. 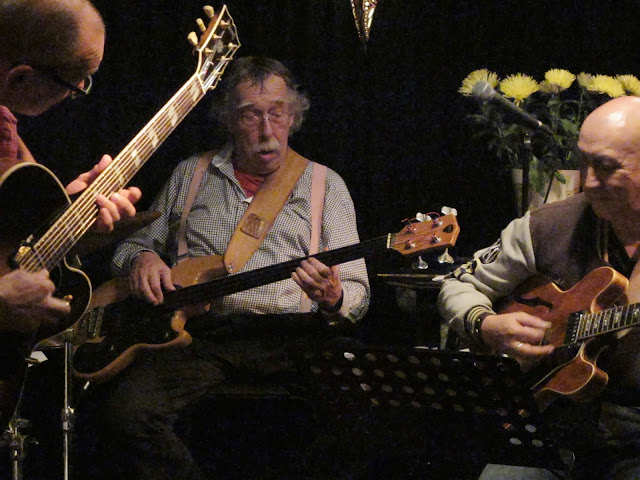 I pulled off a few tracks off the live stream later so that you have an idea om what we did that night. We had a great time, that's for sure. We had local jazzers Wim Louwers on drums and Peter Krijnen on bass. There's 3 complete tunes and one compilation video. Both image and video are lofi.

Autumn Leaves with a touch of J.S. Bach.

Posted by Dutchbopper at 9:33 AM No comments:

Email ThisBlogThis!Share to TwitterShare to FacebookShare to Pinterest
Labels: jazz guitar night at the crow 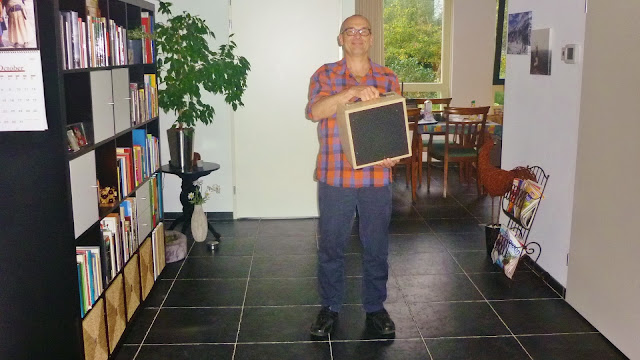 I have been on a quest for the best possible sounding and yet smallest amp for quite some time now. Last tuesday, I received my new Mambo 10 amp. I had been trying out a demo model for several months at home and on stage so I knew exactly what to expect. A great sounding, very small, light-weight amp with enough power (180 watts) to handle just about any jazz gig. The only difference with the demo model is that it now has an MP3 input and headphone output. You can read a review about this amp here. No need to go over the details again now.

That same night I took it to a rehearsal for the yearly jazz guitar night at the Crow and recorded a few clips with it. It sounded great. You can see and hear it in action here:


And here's another clip "I fall in Love too Easily."


I paid about 725 euro for it so it is very competitive in that field too. Quest over!

For details on this amp visit his website at: http://www.mambo-amp.co.uk  If you want to try out the amp yourself mail Jon at: info@mambo-amp.co.uk


Posted by Dutchbopper at 6:46 AM No comments: