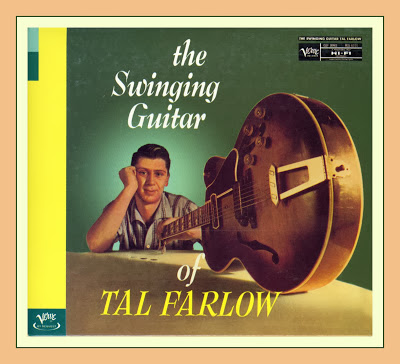 I came across this vid by chance. Surely I must have heard of the name Dan Axelrod earlier, for it sounded kind of familiar and somehow I associated the name with jazz guitar. But I do not think I had ever heard him play. I was really surprised when I listened to the vid that was recorded in 1973. It was like listening to the 1950s Tal Farlow trio with Vinnie Burke and Eddie Costa. Dan must have been a huge Tal Farlow fan, for, he sounds remarkably like him. I had not expected to ever hear a guy play like Tal! And yet, here's this dude copying Tal when he was just 20 back in 1973. Amazing. Apparently, Dan personally knew Tal very well too.

About the video Dan wrote "The musicians playing are myself, pianist Ed Paolantonio and Dave and it's music in the style of the Tal Farlow trio with Eddie Costa and Vinnie Burke. That fact will be obvious to many. I was 20 years old at the time. Pianist Ed Paolantonio has great vitality here and Dave's line was always steady and strong Good memories ... As a footnote, shortly after this tape was made, I began using Vinnie Burke as a bassist. He lived in Orange, New Jersey and when I picked him up (he didn't own a car) he asked what kind of music will we be playing. I put this tape in my 8 track and said "stuff like this, Vinnie". He immediately replied "Where's ya find that old record of Tal and me?". When I replied "No Vinnie, that's MY group" he immediately realized he'd been hired to recreate a dream"