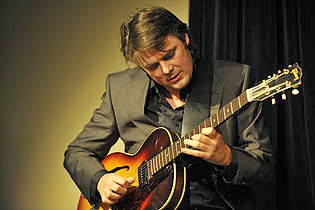 I bet many of you guys don't know Dutch guitarist Vincent Koning yet. Well, here you go. Vincent graduated from the Royal Conservatory in the Hague in 1997 and from the Hilversum Conservatory a year later. Inspired by Kenny Burrell, Wes Montgomery and Tal Farlow, he gradually found his own place in traditional jazz.

Vincent has played and recorded extensively in the Netherlands and abroad. I like his work in the drummerless trio "The Ghost, The King and I" with Rob van Bavel on piano and Frans van Geest on bass a lot. Check it out:

It's All Right with Me