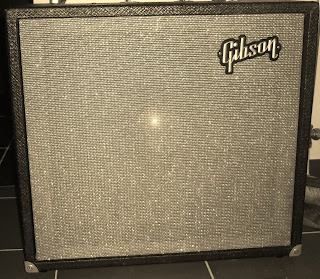 It's not often hat I get the chance to play a vintage amp. However I was lucky to be able to play a 1965 one that does the jazz trick quite well. The Gibson GA 75 Recording with a 15" JBL speaker is a pretty rare bird. According to internet sources, only 74 were shipped in total from 1963-1967. It's a pretty simple amp. 25 Watts, no tremolo, no reverb, 2 channels, 6 tubes, 3 diodes.

The 15" JBL D-130 speaker makes it pretty good for jazz and bebop playing. Lots of bass response! If you turn down the treble control you really get those classic mellow jazz tones.

It's a bit heavy for my taste (heck, I usually play an 8 kilo amp) but it sure was fun playing it! Thanks for making this possible Toon!

I did some hasty takes on a few tunes (some clams!) so this is probably not my best playing but still ... You will get an idea of the sound. Totally vintage bop!