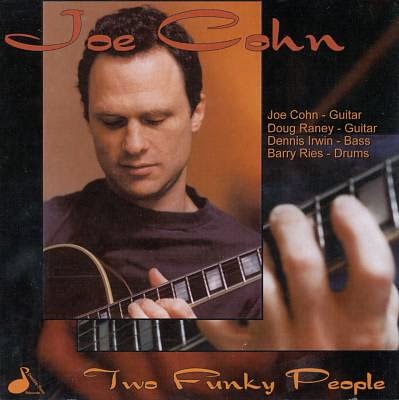 In an earlier post I mentioned this album as a personal favourite. Time to pay some more attention to this great jazz guitar recording and share a playlist of it. In 1997 "Two Funky People" was actually Joe Cohn's (son of tenor saxophonist Al Cohn) debut album. He chose to record it with fellow jazz guitar great Doug Raney. Like on the previous two guitar date I wrote about (Windflower with Herb Ellis and Rermo Palmier), Doug gets as much space as Joe. The result is a very enjoyable beboppish jazz guitar recording.

Here's what David Adler wrote about the album:


Guitarist Joe Cohn is the prodigiously talented son of famed tenor saxophonist Al Cohn. Some may find it odd that on his debut recording fellow guitarist Doug Raney appears alongside him on many of the tracks. The two-guitar format is somewhat reminiscent of Joe Pass's recordings with rhythm guitarist John Pisano, although here Raney is quite prominent throughout as a solo voice. Telling the two guitarists apart will in fact require a good deal of concentration on the part of most listeners. In general, Cohn is the faster and more rhythmically adventurous of the two; his tone is brighter and more dry than Raney's. One would have hoped for more of a Joe Cohn showcase rather than a date on which another guitarist, a second "funky person," practically shares top billing. That said, both Cohn and Raney are fantastic straight-ahead players and they make beautiful music together, aided byDennis Irwin on bass and Barry Ries on drums. Four of the tracks are seldom-played gems by Al Cohn, including the title track. Another, "Motion," is by Doug Raney's famous father, Jimmy Raney. (Perhaps it is the famous dads connection that brought these two together.) Other tracks include the classics "But Not for Me," "Solar," "Days of Wine and Roses," "Ask Me Now," and "Serenata." Thad Jones's mid-tempo burner "Quite Sip" is Cohn's one trio feature, and a great one.

Listen to the album on Spotify (11 tunes):

Posted by Dutchbopper at 6:32 AM