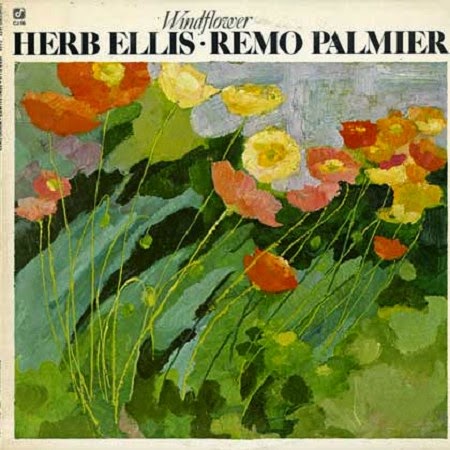 Windflower is an album that Herb Ellis recorded in 1977 together with Remo Pamier. Actually Herb was the leader on this date but Remo gets as much space as he does.

This is my favourite Herb Ellis album and kind of special to me. I remember getting it from the music library in the early 1980s, taping it on cassette, and playing it over and over again in my car stereo on my way to college. I was not playing jazz at the time (and would not be doing so for over a decade) and was still in rock bands, but I loved the sound of jazz guitar already and this album was one of a few that kindled my interest in the genre.

Listening back to it today, I still think "Windflower" is a fantastic album. Herb is really playing at his strongest on this album and the interplay with Remo - a very fine player -  is superb.

I somehow never found it available for listening on the internet - it's not on Spotify or Youtube except for a single track that I added below- but today I discovered the whole album it on Grooveshark. And the good news is you can listen to it without the annoying ads that you find on Spotify. Click here to listen to the entire album on Grooveshark. Click "play all" and enjoy some gorgeous jazz guitar sounds. To me, it's a bit like going home.

Here's "Stardust" from the album:

And here's a review of the album by Scott Yanow:

"This album is most significant for being the first jazz recording in a few decades by guitarist Remo Palmier (who was also known early on as Palmieri). Fellow guitarist Herb Ellis was the leader but he gives his guest just as much solo space as he takes and, with the tasteful accompaniment of bassist George Duvivier and drummer Ron Traxler, the two old friends challenge each other on a variety of appealing chord changes including "The Night Has a Thousand Eyes," "Close Your Eyes," "Walkin'" and Jobim's "Triste." The success of this boppish set led to Palmieri getting his own Concord album the following year."

Posted by Dutchbopper at 3:59 AM