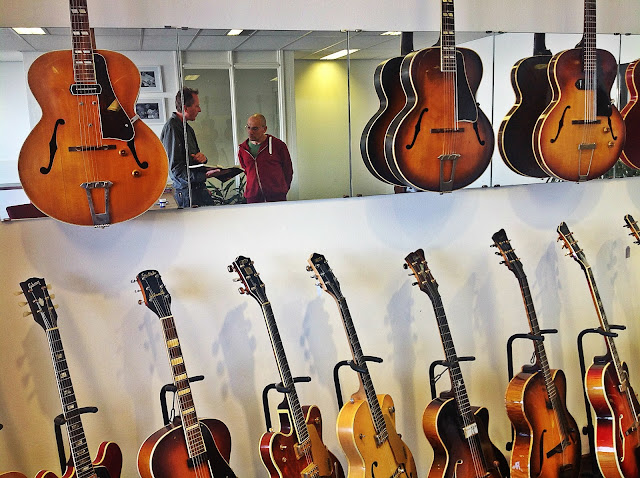 I have been following Dutch luthier Frans Elferink on the internet for a number of years now. His guitars are showcased in Youtube videos by happy owners more and more and his name is mentioned regularly on internet fora. Of course, Jesse van Ruller playing his signature Elferink “Jesse van Ruller”  model helped spread his reputation considerably a number of years ago. But, being a laminate Gibson man myself, I had never paid him a visit.

I wanted to check out a 1972 Gibson ES 335 that he had for sale so I went there yesterday, in the company of my lovely wife as photographer. High time for an interview! After a pretty long drive we arrived at his workshop in an industrial area of Noordwijkerhout. On the ground floor we first got a tour of the workshop and then Frans took us to the first floor where I got to see and play his guitars. 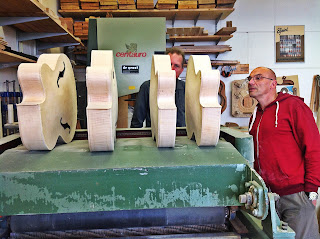 He turned out to be a really, really nice guy with lots of great guitar stories to tell. There was this story about him fixing Jesse's old Levin guitar after he had run over it with his own car. He showed me some pics of that remarkable restoration.


I did not buy the 335 but I did get a good impression of his work and guitar building concept and got to play some fine instruments.

Frans produces 12-15 Elferink archtops every year. About one in five is a custom order guitar based on the personal specs of the client but he mostly builds his own models like the “Modern”, the “Tonemaster”, the “Excalibur” and the “Jesse van Ruller.” You can check out the range here. I got to play a custom order Elferink “Byrdland” that sounded great.

Building guitars comprises about two thirds of his income but it’s not the only source. He also sells vintage archtops (10%), does repairs (10%) and organises workshops “archtop building” (15%).
He has been in the guitar building business part time since 1993 but only full time for two years.  At his current location he has been residing for 6 years. Until now he has built about 170 guitars, most of them archtops but also a few steel strings and even some solid bodies on custom order. He is usually building up to 6 guitars at a given time.


His real passion is building archtops made of all solid woods. For the tops he uses Sitka or European Spruce and for the backs, sides and necks he uses maple. He prefers combining European spruce tops with European maple and Sitka Spruce with “Big Leaf” maple. Though he uses routed in pick-ups on some models (eg. The “Jesse van Ruller” model), about 75% of his archtops carry floating pick-ups. He is not fond of using laminate woods. He has been experimenting with them but laminating woods yourself as a luthier for only smaller series is way more time consuming than applying solid woods and requires special equipment. So it’s not really that feasible for him.

Not surprisingly, Frans prefers jazz guitars with a genuine acoustic character. What he is aiming at are clarity and punch. He wants his guitars to have an explosive attack. He is not that interested in sustain. “Maple is not about sustain anyway, it eats up lots of energy.” What he is going for is a clear, short and vibrant tone with a powerful projection. After playing a few of his guitars I knew exactly what he meant. I played an Excalibur, a Tonemaster and a Moderne and they all had a very lively, vibrant acoustic tone with lots and lots of punch. His guitars are amplified acoustic instruments rather than the laminate electric archtops I have been playing all my life.

There are quite a few Elferink videos on Youtube. I like this one by Daan Kleijn in particular:

We talked about the business for a while too. It’s pretty hard to make a living as a luthier. He is doing ok now but he used to have a side job for many years. Frans stated that “brand awareness” and reputation are so important these days. You have to be present on the internet and in the social media and that’s why he is happy with guys playing his guitars on Youtube. I hope this post helps to create some more awareness about this fine Dutch luthier. 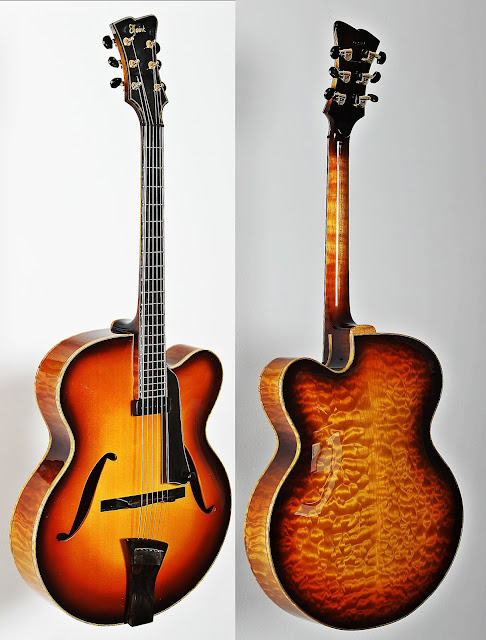 Check out his website for more information on Elferink guitars here.
Posted by Dutchbopper at 5:48 AM 5 comments:

Sal Salvador (1925 - 1999) was a bebop jazz guitarist and a prominent music educator . I came across a few recordings of him on Youtube (some rare) that are worth checking out.

Sal, who was also an instructor and the author of many jazz instruction books, was born in Monson, Mass in 1927. During the ealy 1940s he was drawn to jazz through the recordings of Harry James. He first played in the style of Dick McDonough, Karl Kress and George van Eps. At the age of 18, he first heard recordings of Charlie Christian and he decided to change over to the electric guitar and he started taking lessons. In 1949, Mundell Lowe, a good friend of his, recommended him for the position of staff guitarist at New York's Radio City Music Hall.

In  1950 he became a staff musician at the Columbia label and two years later went to work with the Stan Kenton Big Band, which proved to be his breakthrough job. He left the band 18 months later but Kenton enabled Sal to make an LP for Capitol records under his own name. Here's one of the tracks of that album (Kenton presents Jazz: Sal Salvador):


A year earlier. Sal had already recdorded  a quintet album for Blue Note with Frank Socolow (tenor saxophone), Johnny Williams (piano), Kenny O'Brien (bass) and Jimmy Campbell (drums). here's a track from that album (a playlist of which can be found on Youtube):


In 1957 Sal recorded "A Tribute to the Greats" with pianist Eddie Costa a.o. (who played with Tal Farlow in his drummerless trio):

In 1960 Sal started his own big band, the Colors in Sound Orchestra, which toured and recorded for five years. Here's a fine clip from the album: "The Beat for this Generation":

From 1970 until his death Sal Salvador taught jazz at the University of Bridgeport and Western Connecticut State University. He also taught privately in New York City and recorded occasionally.

This clip is from a 1978 sextet album called "Starfingers":

He re-formed his big band in the '80s, and was named to his position as head of the guitar department at the University of Bridgeport. In the 1990's he began recording again with a small group and he performed in several recent JVC Jazz Festival concerts, usually in duets with Mundell Lowe.

Posted by Dutchbopper at 6:15 AM 3 comments: