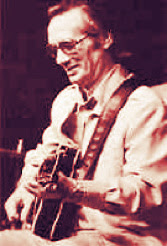 In one of my first Blog entries I referred to two albums that were important in my transition from pop music to jazz. Watching "The Great Guitars" with Herb Ellis, Barney Kessel and Charlie Byrd on tv in the mid 70s had already sparked my interest but in the early 80s I got my first jazz albums from the Music Library and started taping them on cassette and playing them over and over in my car. It was to take way over a decade however before I picked up the jazz guitar myself .... 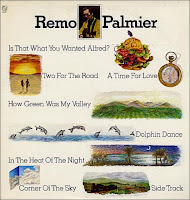 One of those first jazz guitar albums that I loved so much was by Remo Palmier. It was his self-titled 1979 Concord Jazz release "Remo Palmier." The swinging was easy and it showcased an endless string of wonderful and mellow jazz guitar sounds. The playing was so pretty and melodic. It blew me away. So I was thrilled to finally find a few clips of it on Youtube. The album has been out of print for ages and is not available on CD AFAIK. Earlier I posted a great track from it in an entry here. But I am happy to be able to post some new clips of that fine album here. Listen to this!


Remo's recorded output as a leader is very limited. He was a studio musician with CBS for over 27 years and was guitarist with the Arthur Godfrey (radio) Show in the 1960s and 1970s. In 1972 Palmier made a modest return to jazz freelancing for a period with his own quartet in various New York clubs. When he recorded "Remo Palmier" in 1978, he had not been recording as a jazz guitarist for over 30 years!

Here's what WIKI tells us about him:


Remo Palmieri hit the New York jazz scene as a teenager in the 1940s and almost immediately found himself playing with some the premier jazz artists of the time. He teamed up first with Coleman Hawkins and then Dizzy Gillespie and Charlie Parker. His talents as a jazz guitarist and musician were in great demand and during this same period he recorded with Teddy Wilson. In 1945 he recorded with Gillespie and Parker and Red Norvo and was awarded a "new star" award from Esquire, Palmieri was one of the first guitarists to extend the ideas of Charlie Christian, but he chose to live the life of a studio musician. In the late 1940s he began performing with Arthur Godfrey on CBS, and taught Godfrey to play the ukulele. He was with CBS and for more than 27 years as he pursued a very successful career as a studio musician. If you listened to the Arthur Godfrey radio show on CBS in the 1960s and early 1970s you heard Remo Palmieri's guitar in the background. He changed his name legally in 1952, omitting the "i" at the end, to Palmier to not be associated with the already famous, Eddie Palmieri.
In 1972 Remo Palmier left the studio when the Godfrey show was canceled and he returned to playing in local nightspots in New York. Then in 1977 his friend Herb Ellis convinced Carl Jefferson to invite Remo Palmier to the Concord Jazz Festival in Concord, California. At that festival Palmier and Ellis teamed up for some duet playing and later that year they made the recording Windflower. That recording marked the end of a 30 plus year hiatus from recording for this talented jazz guitarist. Then in 1979 Concord Jazz produced the first recording on which Remo Palmier was billed as the leader. 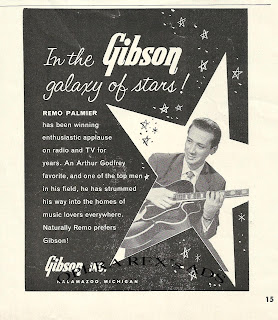 Remo was largely self taught. He first started to play the guitar at the age of eleven. He became interested in jazz when he heard some Tommy Dorsey recordings in 1938. He then started to listen to recordings by Django Reinhardt and Charlie Christian. In 1942 he joined painist Nat Jaffe's trio and soon gained a reputation as one of the most developed East Coast jazz guitarists.

After recording "Windflower" with Herb Ellis in 1977 and "Remo Palmier" in 1978, he continued to perform regularly and work as a studio musician. He also taught privately. Remo died in 2002. Here's a final track from "Remo Palmier" for you to check out. A wonderful player.

Posted by Dutchbopper at 4:23 AM