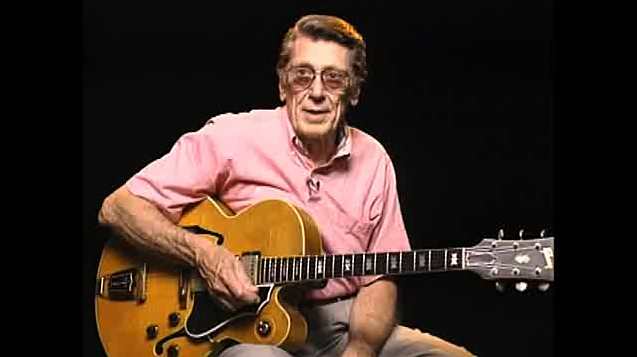 Tal has a very characteristic approach to harmonizing melodies. If you are a bit familiar with his style and sound, you immediately hear it's him. Tal usually uses a pianistic approach to playing chord melodies because of the counterpoint possibilities and indepedence of movement. He alternates bass lines, melody and all kinds of voicings in his chord melody style.  Other effects are single line fills, intervallic lines and chords moving under a repeated melody line. His large hands enable him to create voicings with five or six notes in them, with his thumb covering the root or the 5th of the chord on the last two strings. They also enable him to stretch for high range melody notes with his pinky while playing mid range chord voicings. He will often use his right hand index finger to hit a bass note on the 6th string. Tal often emphasizes the melody notes of a chord by strumming with an up stroke. The bass lines he uses keep the progression and the forward movement alive and in them he often prefers the 5th over the root. For a more detailed study of Tal's approach to reharmonization I recommend Steve Rochinski's book on Tal Farlow.

I came across two transcribed solo pices on the Tube. The first one I would like to mention is Autumn Leaves. It's a personal favourite of mine. I read somewhere Tal was just warming up in the recording studio while the tape was already running ... It's a great one to study. Tal retuned his A string on the original recording but the transcription uses standard tuning.


And here's a transcription of Misty which he gives a rather advanced harmonic treatment.


There are many more solo Tal performances on the Tube for you to enjoy but these are the only transcribed ones that I found. You can buy the PDFs from Francois Leduc here.
Posted by Dutchbopper at 8:04 AM No comments: 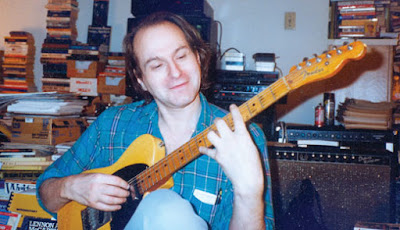 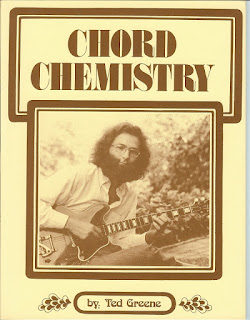 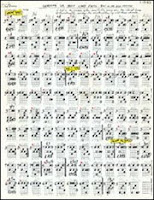 The first time I learned about Ted Greene was when I visited the music department of a library. It must have been in the late 70s or early 80s. I came across a guitar book that blew me away. The title was " Chord Chemistry" and on the cover there was this long haired bearded guy with spectacles holding an electric guitar. I was puzzled. A book by a jazz guitarist that looked like a Woodstock hippy? The book was very intimidating. I was a young rock guitar kid and  had never seen so many chords at one time. Most of the chord names and shapes I did not know. It all looked like all this was from another planet. The names of the chords sure did. WTF was this? It was to take many, many years before I returned to the book.

Ted Greene is one of those forgotten jazz heroes that has acquired a cult status among jazz guitar fans. Though a a heart attack claimed his life on July 23, 2005, he continues to teach through his books, videos, and lesson guides. Many of these are posted on his official website. You can download tons of his material there. Highly recommended. The man was a genius. On Youtube you will find lots of live videos and transcriptions too.

Ted began playing the guitar at the age of 11 and was an accomplished player while still in high school. He played with local R&B and Blues Rock groups. He briefly studied accounting at California State Northridge, but dropped out to devote his life to music.

While he is often regarded as a jazz musician these days, he actually played many musical styles. Among local players, he was mostly known as a music educator, which included private teaching, seminars at the Guitar Institute of Technology, columns for Guitar Player magazine and his series of instructional books on guitar harmony, chord melody and single-note soloing. He wrote four books on the subject of jazz guitar performance and theory: Chord Chemistry, Modern Chord Progressions: Jazz and Classical Voicings for Guitar, and the two-volume Jazz Guitar: Single Note Soloing.

He would also make occasional live appearances at clubs in the San Fernando Valley, usually playing a Fender Telecaster. Ted had a very nice collection of vintage guitars, among which many vintage Telecasters.Ted typically worked as a vocal accompanist, which he preferred because he found group settings restrictive. While he was a sought-after session player, he derived much of his income from tutoring.

His playing style included techniques such as harp-like harmonic arpeggios, combined with gentle, tasteful neck vibrato, creating a "shimmer" to his sound. Other notable techniques included playing songs with a "walking bass" line with simultaneous melodies. Greene often used counterpoint to improvise. Below is an example of these techniques. The track is "Danny Boy" (1977).

He used a large variety of chord voicings, often creating the effect of two simultaneous players. He recorded one album, Solo Guitar, in 1977, and although respected by guitarists, he was not well known to the public. The recording, originally released in 1977 on PMP Records, contains no "over dubbing" (recording on multiple tracks). Here's another example: "Send in the Clowns." (1977). Notice the ending "classical style."


Personally, I don't think solo jazz guitar playing can be prettier than this. Just gorgeous.  Surely, a master at work. There is an entire playlist on Youtube of the 1977 album "Solo Guitar" the above tracks are from. Click here to listen to the entire album. So pretty ...
Posted by Dutchbopper at 6:47 AM 2 comments:

Last Christmas' Santa was very kind to bring me an unusual present. To my big surprise I was given an Ibanez Piccolo guitar. I had no idea such an instrument even existed! At first I thought it was some kind of toy but once I got used to the very small scale of he neck, I was excited to find this was a real instrument. It did not take me very long to play bop lines on it. I don't think Ibanez made this baby guitar with the jazz musician in mind - it was probably designed as a grab-and-go open chord strummer - but that won't stop me of course. Chord melody playing is a bit of challenge on such a narrow neck but hey ... it IS possible. Single note is more comfortable though ...

The guitar is perfect for travelling. Here's what the sales talk says:

"Smaller scale instruments have increased in popularity over the past few years, because not only do students seem to be starting younger than ever, but also the easy-to-transport guitar has become recognized as an excellent companion for the weary traveler. From the on-the-go businessperson who needs a guitar that can fit in a plane’s overhead compartment, to the happy wanderer just looking to animate his sojourn with a song, the compact travel guitar can be an uplifting addition to any expedition."

The guitar's official model name is "EWP14OPN." It is a 1/3-size, steel string Piccolo acoustic guitar. Similar in scale to a Baritone ukulele (17”), the EWP14 sports a cutaway body. The top, back, and sides are made of ovangkol, a wood found in Western Africa, known for its beautiful figuring and rosewood-like tone. An Open Pore Natural finish allows the body to resonate more freely for improved tone and projection. Other features include an abalone rosette, rosewood fretboard, bridge and chrome die-cast tuners. To optimize string tension, intonation, and tone, the EWP14 is tuned in the key of A (A, D, G, C, E, A), up a fourth from standard tuning.

Here's a jazz standard on it, both comping and single string, as you can see. A duet with myself ...