For years I have been making videos using video editing software such as Movie Maker and Cyberlink Power Director. I sometimes edit the video sound track a bit with software such as Cyberlink Wave Director or Cool Edit. But making a video hardly involves multi tracking, You just play over an existing sound track and feed both signals into your camera through a mixer. You make a mistake, you have to do the entire video track again ... There's just no way to overdub a video image. So video recording is way harder than recording a sound clip in your home studio.

A friend hipped me to Audacity a while ago and I finally got to try it out over the last few days. It's actually the first time I got into multitracking ever. Can you believe that? Audacity is free open source digital audio editor that enables multi tracking and all kinds of other audio editing features such as:
Way too many possibilities to discuss here. It's really very impressive that the software is completely free. What I like about it is its simplicity. It does not require a long learning curve like Protools or Cubase. Heck, I hate learning curves (I never read manuals of any kind) and I could work with it within hours. But there's a shitload of tutorials on Audacity too. Tens of millions of people use it. Here's one for beginners (of course I did not watch it):


The first problem I had to solve was the latency problem though. After some unsatisfactory trial recordings I found a good tutorial on Youtube and once I fixed that problem I was ready to record my first multitrack recording. I did a quick take of "Body and Soul." I stole a bass part from the internet and I added a comping track and a lead track. I did not overdub though, just played twice over the bass part (so comping and lead) and then mixed and edited the separate tracks. I ran the sound file into my camera so that you can see what it looks like. No eq was involved by the way, just some compression You can alter your recorded sounds in many ways but I just recorded what came out of my amp. 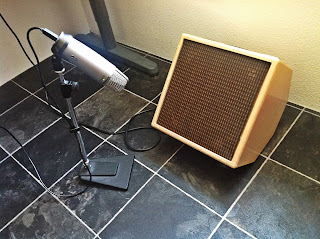 The comping track was done on my Tal Farlow. The lead track on the 1963 Barney Kessel. The amp was my Mambo 10. To record the guitar sounds I used a Samson USB Studio condenser microphone. Somehow I have not been able to feed my Behringer USB mixer into Audacity (the programme refuses to record with it) but I hope to fix that in the near future. 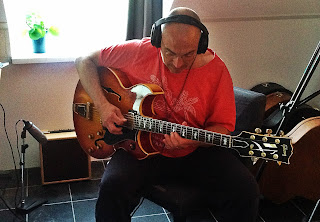 I realise I just scratched the surface of the recording and editing possibilites but Audcaity looks very promising. To be continued!

The latest version of Audacity can be downloaded here. Make sure you select the correct recording and playback devices before you start. And do fix the latency problem by finding the correct latency correction for your PC. Like I said earlier, you will find many tutorials on Youtube for Audacity.

Email ThisBlogThis!Share to TwitterShare to FacebookShare to Pinterest
Labels: Audacity