A few posts ago I was kind of enthusiastic about Audacity. I still think it's pretty cool for all free recording software. However I discovered some serious flaws, namely the fact that all the audio editing is destructive. More professional software doesn't have that. A non destructive audio editor saves the steps of the changes that occur on the sound file separately so the edited file as well as the original file are saved. At any point in time you can go back to the original wave form because it hasn’t been modified. Another serious draw back is the latency problem that invariably occurs in Audacity. You have to experiment with latency corrections before you can multi track.

So I went to better mulitracking software and ended up with Cakewalk Producer X2.  Zero latency and non destructive editing. But not free. Here's a track I recorded today. Two tracks, no overdubbing. So complete single takes. I'm still in a learning curve so I don't even how to fix glitches and mistakes yet! The guitar you hear is my most recent acquisition, a 1964 Gibson Es 125.

And also in the hardware department there were some changes made. I purchased a Focusrite Scarlett 2i2 USB audio interface (no more hiss and noise!!!!!) and an Art Studio V3 valve preamp. I noticed that there was something missing in the amp modelling sounds I use when I make a video or an audio recording. And i am pleased with the Art Studio V3 preamp. It warms up the digital guitar sounds nicely but also any microphone will sound better through it. The cool thing about the Studio V3 is that has a preset of a number valve "voicings", suitable for guitar, keyboards, piano, bass, vocals, acoustic guitar etc.

Here's the complete signal chain of my current recording rig: 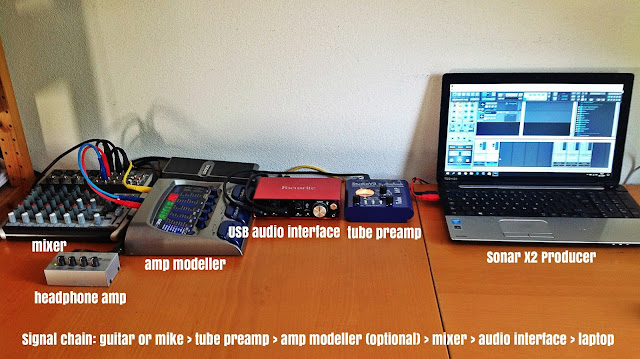 As you can see I send all the sounds through a Behringer mixer before it gets to the Focusrite audio interface that converts them to digital sound before it enters Sonar Producer on my laptop.

The stereo amp modeller is used for recording guitar but I sometimes use a mike to to record acoustic sounds. I still like the Digitech amp modeller better than the virtual amp that is in the Sonar software. I kind of prefer to have a good sound before it goes into the laptop. But it's possible too to record using the on board virtal amp in Sonar. It's not bad.

So much still to discover in Sonar. I've only scratched the surface so far ...