It seems the Gibson Barney Kessel wasn't designed by Barney after all ...


I have been playing my 1963 Gibson Barney Kessel for over a year now and I still dig it a lot. It's a very  resonant guitar with a more complex high end than my other laminate guitars.

In my earlier post on the Gibson Barney Kessel I stated that: 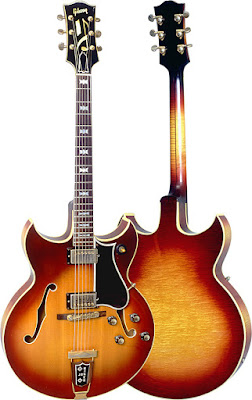 "Though the Kessel obviously is a signature model I am not sure to what extent Barney was really involved in designing this guitar. Some argue the model had been designed already and Barney was only asked to endorse it after that fact."

It seems that George Gruhn has provided the definitive answer to who really designed this model in an article he wrote for vintageguitar.com.

The article states that in 1960, so two years before the Barney Kessel was introduced on the market, an experimental prototype was bought by a guy named Hines from s store in Nashville. You can see it on the left. The owner of the store told Hines
the guitar was one of a pair, and the other was apparently exactly alike except it was single-cutaway and went to Tal Farlow. Apparently, When Hines obtained the guitar, the tailpiece plaque was blank, so Stone sent it back to have Gibson engrave Hines’ name on it.

"Walter Carter checked Gibson’s records on this guitar and found it listed as being made for Tal Farlow in October, 1960. He found no record of the other guitar. Since Farlow is now deceased, we are unable to ask his personal recollections, but it’s clear this guitar pre-dates the introduction of instruments made with the Barney Kessel endorsement. It would appear Kessel was shown an instrument of this type and decided to endorse it rather than designing a Barney Kessel model on his own."

Maybe this explains Barney's reluctance to play it. For the article, click here.


I have always found many similarities in the BK and the Tal Farlow model. I played a 64 Farlow a few years ago and it was a very similar instrument sound. It was of a lighter build than the current TF models and more resonant therefore, kind of like my BK. Sure, my own TF reissue has a less hifi/complex sound than my BK but even here there are still many similarities, the most obvious difference being the spruce top (BK) and maple one (TF).

Email ThisBlogThis!Share to TwitterShare to FacebookShare to Pinterest
Labels: the gibson barney kessel

But Not For Me

Every once in a while I hear a tune played in a way that really knocks me out. I came across Joe Pass' "But Not For Me" and somehow I had missed the tune and the album it is on completely ... until now. The album is from 1981 and is called "Ira, George and Joe." It is a wonderfully relaxed but totally swinging take. On the album Joe is accompanied by John Pisano (rhythm guitar) Jim Hughart (bass), and Shelly Manne (drums).

I was so inspired by the track that I wanted to do video of the tune in the same key of D and the same tempo. Of course I could not find one so I had to manipulate an existing (slower) track in a different key. First I had to transpose it and then speed it up. I used Cyberlink Wave editor to do that but there's plenty of other software that can do that too. However, the quality of the sound is often impaired. The instruments usually sound a bit funny after transposing or tempo changing ... I added a comping guitar to cover it up a bit though and then I had a usable backing. Not perfect, but usable.

How about your turn? Here's the backing if you'd like to have a go at the tune. Have fun ...

Email ThisBlogThis!Share to TwitterShare to FacebookShare to Pinterest
Labels: But Not For Me
Newer Posts Older Posts Home
Subscribe to: Posts (Atom)