Praise be to the Gibson ES 125 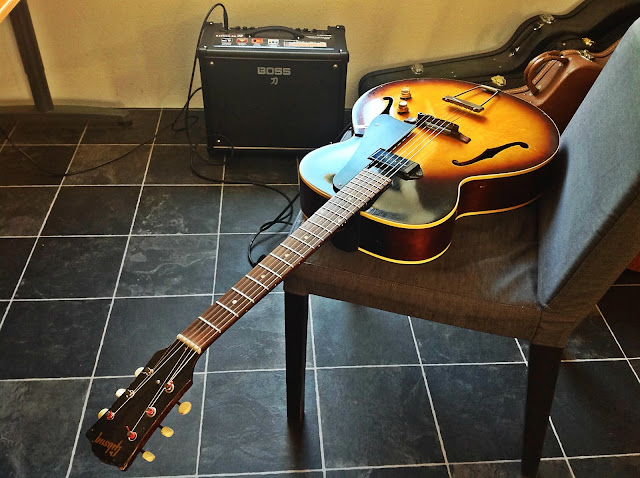 Wow, It's been months since my last Blog entry. I haven't been active on Facebook either. I have had some better times and let's leave it that.

Last april I got my 1964 Gibson ES 125 from a store in Amsterdam.I wrote about that in an earlier post. I have been playing it with great pleasure ever since. It's an amazing vintage guitar, considering its relatively low price on the market. There are many around (I read somewhere that it was Gibson's most produced and actually mot successful model ever) so it's not that collectible. It was designed as en entry level archtop in the late 40s  and it had no fancy appointments. Still, I like to believe it is not THAT different from a 1950s P90 equipped 175. It has a maple top, mahogany sides and maple back, a one piece Honduras mahogany neck, an unbound rosewood fingerboard, nickel-plated Kluson Deluxe tuners and one P90 pup in neck position. No fancy bindings and position markers. The body size at lower bout is 16". Scale length 24 1/2". Nut Width: 1 11/16".

What is so nice about the 125? Well, to begin with ... its price.If you are lucky, you can get one for under 2k. And make no mistake, it IS a genuine vintage Gibson guitar. You'd have to pay at least twice that money for a 1950s ES 175 ... So price wise, the ES 125 has no competition in the vintage electric Gibson archtop market. None whatsoever.

And then there its sound of course. It is of a much lighter build than contemporary Gibson laminates and together with the old woods and vintage production methods, this results in a very responsive instrument. It is really nice to play unamplified. A great couch guitar. Plugged in, you can get that old school 1950s bebop sound easily.

Considering what the 125 has to offer, it is remarkable that so few actually play them.

Here's two clips that I recorded recently. One features the guitar unplugged and one plugged in. Mind you, this guitar was never intended to be used unamped ... The chord melodies are mostly my own arrangements, but not all.