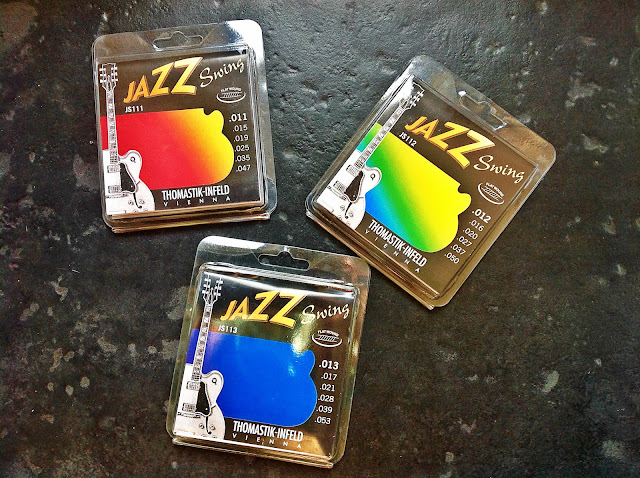 A few years ago the Thomastik Infeld company was so kind to send me a few packs of TI Jazz Swings so I could test and review them on my Blog. Well, as it happened I have strung all my guitars with them in the mean time (on some 012 and on some 011) and have been playing them ever since. So that review is long overdue. But here it is ...

Prior to my conversion to the TI Jazz swings in 2015 I had been using d'Addario Chromes for about 20 years. To great satisfaction I must add. I still think Chromes are great sounding strings for Jazz archtops. So why the conversion? Let's have a look. I'm going to focus on 3 variables: feel, sound and durability. 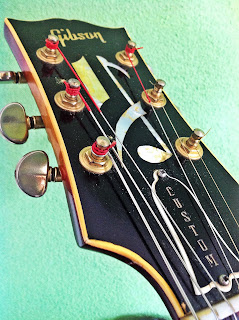 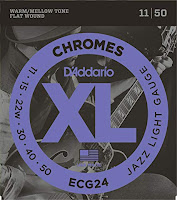 Feel
This is undoubtedly the main reason for my conversion. TI Jazz swings feel much more comfortable than Chromes due to the lower strings tension when using similar gauges. As a matter of fact, the string tension on a set of 0.12 TI will be more or less equal to a 0.11 set of Chromes and, consequently, a set of 013 TIs will feel like a set of 012 Chromes. That's partly because the string gauges are slightly different starting from the G string and partly because Chromes feel "stiffer" somehow. The TI's smoothly polished nickel winding on a round core versus the Chromes' stainless steel winding on a hex core will make the TIs way more flexible and therefore more comfortable to play.

Sound
Many argue that TIs will sound more mellow than Chromes. So Chromes are a bit "brighter" sounding. This makes sense, because hex core strings tend to sound brighter than round core strings. Personally, I did not notice THAT much difference between TIs and Chromes sound wise. Both brands sound great. In addition, it is argued that round core TIs will have more sustain than hex core Chromes and that they sound more vintage. The superior flexibility and sustain of round core strings is explained in this short vid:


Durability
Both brands will last a long time, that's for sure. Both TIs and Chromes will easily be on one of my guitars for at least a year. Sometimes the only reason I change a set is because the intonation finally goes bad. 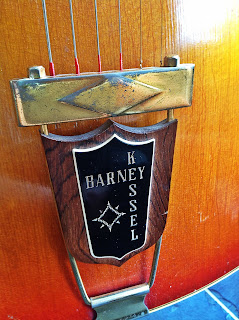 Looks
This is only a minor advantage but I do like the TIs red wrapping on the wound string ends and the brass plated high e and b strings!

Conclusion
Though I always liked Chromes, I will stick to TIs from now on. Over here in Europe they are cheaper than Chromes and I really prefer the superior "feel" of the TIs. Sound wise, they are not worlds apart but I think the TIs produce more sustain and are a bit more mellow sounding. Heck, I finally found a guitar related advantage of living in Europe! I get the best strings for half the money but you guys in the US get the vintage Gibsons for 1-2 k cheaper and have way more to choose from ...

To sum up, the TI Jazz Swings are very reasonably priced in Europe, a joy to play and they last forever. End of story.
Posted by Dutchbopper at 6:40 AM