Interview with Erwin van Waardenburg from the Guitar Company 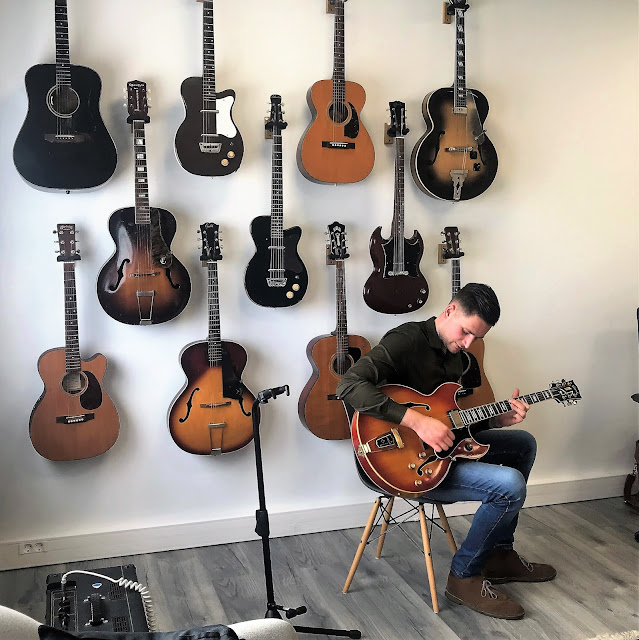 A few weeks ago I purchased a stunningly beautiful 1947 Gibson ES 300 at The Guitar Company. Of course that was a great opportunity to ask Erwin, the owner, some questions. So here we go ...

You started to collect vintage guitars at a pretty young age. How did that go about?

I was quite young when I began collecting and studying vintage guitars. It all started when I was about 10 years old. My brother and sister already played guitar and my father asked me if that was something I would like too. I liked ACDC and Led Zeppelin a lot so it seemed like a good idea. Together with my parents I bought my first guitar at Dijkman in Breda. It was a Silvertone SG model.

When I was 14, I once went shopping with my parents im Antwerp. There was a small store where I saw and fell in love with a Gibson Les Paul double cut. I started saving and checked the store regularly if the guitar was still there. Finally I could buy it and though I paid too much for it, at 14, I was the proud owner of a Gibson guitar.

My first real vintage guitar I bought when I was 15. At the time I was already infected with the vintage virus and I borrowed money from my parents to buy a 1971 Gibson SG special. I was only allowed to play it after I had repaid my debt.

What music do you play yourself?

My first project was a Surf band. After that I played in a rock and blues band. But my real love was rockabilly and country music so I was soon in a band that played that type of music. Right now I would like to start a bluegrass band.

You have a passion for Gibson hollow bodies. Why is that?

I have a passion for Americana. Bluegrass, western swing, jump blues, country, rockabilly. I used to listen to Brian Setzer a lot. On holiday in Germany I bought my first Gretsch. After that I owned several non vintage Gretsch guitars, White Falcons, Black Falcons, 6120’s, Country Classics, Country Gentlemans, Duo Jets, Firebirds etc. I could not afford a collection so it was a matter of buying and trading in. I must have tried out all of the Gretsch models. Then I came across a Gibson ES-225T from 1956 and I was hooked on vintage guitars. Now that was a guitar with mojo. The neck only had 50% of the original finish and it felt and looked great. I sold all the Gretsches and started to collect vintage Gibson hollow bodies. I once even sold my car to be able to afford a guitar. 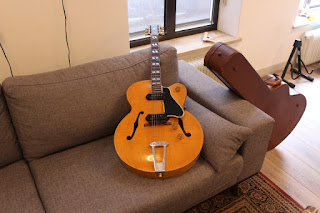 That’s a nice story. I have always thought the ES 350 was the ultimate Gibson hollow body. I had been looking for one in Europe but to no avail. So I placed an ad and forgot about it over time. One night an older gentleman called me and told me he had one. Let’s call him Frank. Frank had seen the guitar being played by Lloyd Davis on his European tour with Willis Jackson. Apparently Davis died in Antwerp during that tour and the guitar went back to the USA. However, via a befriended trader, Frank was able to purchase it in 1980.
When I visited Frank to buy the guitar I had to audition. At first he did not like what I was playing but when I played some jazz on it, he changed his mind and we agreed on a price. It has been my favorite guitar ever since. It turned out to be that the guitar I had been looking for so long was just half an hour’s drive away.

What are other favorites from your collection?

I have owned many great guitars over the years. Many ES models from the 40s and 50s and 1950s Les Pauls. A highlight was last year when I found a Les Paul from 1959 in the Netherlands.

What was your worst buy?

A 1956 Gretsch Firebird. It had all kinds of issues – a screw was drilled in the neck pocket - and I had it restored for a lot of money. Later I had trouble selling it and had to let it go for way under my asking price.

Why did you start The Guitar Company?
I am crazy about vintage guitars. I read about them every day. Much to my girl friend’s annoyance haha. When I was still very young I was buying and trading in guitars all the time. I met many people and built up some kind of network. Sometimes I made a profit.
After my studies (art academy with specialization online marketing) I started a design agency. So I already knew how to market a product and when I noticed the average offering of local stores I thought I could do a better job.
With the Guitar Company I want to focus on quality vintage guitars. I rather have 30 good guitars than 100 medicocre ones in my collection. It’s the only way to stand out in the market.

Where do you get your guitars?

Many clients think I buy from the USA. But the truth is that I get most of my guitars from my personal network.

Do you have any tips for buying a vintage guitar?

Knowledge is power. Focus on the guitar you want. Many great books on vintage guitars exist so be sure to study your literature. Do not buy from Ebay just like that. It takes experience to see if a guitar is original or if any repairs were done on it or are needed. A bad purchase can cost you a lot of money. For your first vintage guitar you had better seek out a vintage specialist.
And another thing. A vintage guitar is not a good guitar by definition. It is important to ask yourself if the guitar is really going to make you happy or if it is a worthwhile asset to your collection.

Posted by Dutchbopper at 5:04 AM

Email ThisBlogThis!Share to TwitterShare to FacebookShare to Pinterest
Labels: Interview with Erwin van Waardenburg from the Guitar Company