In the mid 2000s I came across a video of a young guy playing over an insanely fast Oscar Peterson solo. It was really an extraordinary feat and I was surprised to find out it was a countryman of mine named Wim den Herder. This solo generated quite some publicity for him. Over the years I kind of lost touch with his career but when I did recently, I found a few astonishing videos and info on him. When he was just 13 years old, he won the Dutch National Guitar Awards and in 2003 he began his jazz studies at the Amsterdam Conservatory, from which he graduated in 2008. In 2009 Wim founded The Guitar Academy, a guitar training school. Upon revisiting the spectacular Oscar Peterson solos once gain - there were a few more than I thought - I decided to ask him about his motives to tackle such hard stuff on guitar. Dudes, if this won't blow you away in terms of dedication and practise regime, I'm not sure what will ....

How did you get the idea to play Ocar Peterson on guitar? 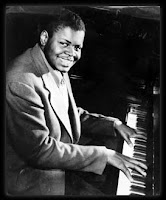 When I heard this solo (Just Friends) I immediately thought that it would be impossible to reproduce it on guitar. But I had tried this earlier with a solo when I was 16. You decide to stick firmly until you can do it. That decision and the discipline is extremely motivating. Either you fail or you become a better player.

How long did it take you to get the first Peterson solo under your fingers?

It went faster than I had expected. It took me 16 hours to figure out the 60 seconds of the solo and another 8 hours to record it. So after 3 days I had it on Google video and later Youtube.

It was the best thing that had happened to me. I got mails from Paul Reed Smith and Oscar Peterson's daughter. Later Jennifer Batten even recognised me backstage. When I invite guitarists over to Amsterdam, I always send them the vid first. A video like that that going viral  opens all kinds of doors. Its impact is hard to measure but of course it made me a better player.

I noticed a video of a live performance of that solo. What's the story on that?

When I was to play that same solo live on stage, I studied it at 115% speed, because live your level of playing always goes down a bit. This way I had the feeling that I could do more than was required. This took me another week of studying, about 25 hours.
By the way, many people think when they see a number like that "oh, that's not too bad" but try focusing on ONE solo like that for 25 hours. It feels like a very long time.

What other Oscar Peterson solos did you study later?

I recorded another three solos. Sweet Georgia Brown, The Boogie Woogie and one of which I do not know the name. I called it "Tribute to Oscar Peterson."


Pfff ... Totally insane stuff. On your Youtube page I came across a Rhythm Changes etude. How about that one?


What you do every day will grow over time. It was a bit like going on holiday and sorting out what to take with you ... By this I mean that the list becomes longer and longer but by sheer force of repetition you are able to remember all the items. I composed a new chorus every year. It eventually grew into a 5 minute lick with 3000 notes. I think improvisation is not completely free. You learn all kinds of stuff by composing and then putting it all together live on stage. Just like an expert in a talkshow who has gained knowledge over the years. Every day you can compose a perfect solo and live you use the material available. Live improvisation is about 10% freedom and about 90% preparation.

How did your career go after that? 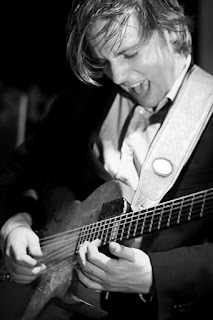 It was much more subtle than just the attention the videos generated. I was able to play better lines and I got better at jam sessions. I had all these licks under my fingers. Also, in excersises like that you often you end at the third and then you have to think of something new. One of the best ways to learn how to improvise is to play transcribed solos!

You are not the typical archtop guitarist. Most of the times you are playing an acoustic guitar. Why is that?

I prefer the sound of Maton guitars: open, lots of clarity and with more expression. In addition, I like styles that are guitar oriented like metal, blues, fingerstyle and gypsy jazz. In jazz, guitarists often try to sound like horn players and roll off the treble and leave out vibrato. I think that diminishes the sound of the guitar itself. Probably just a a matter of taste.

What are you up to these days?

I'll be demonstrating "Wimpicking" at Troy Grady's Youtube channel shortly. Wimpicking is a technique which allows you to play multiple guitar parts simultaneously with only one pick. It becomes even possible to strum and play a bass line at the same time with a pick, three to four, like this:

Or you can play a power chord and a melody like this:


The secret is that you can do this if you break it up into small parts (usually 4 notes) and then if you practise real slow, eventually you can do it. Over time you'll be able to do it fast with 2560 notes! Just take your time.

Thanks for the interview Wim!

Posted by Dutchbopper at 9:25 AM

Email ThisBlogThis!Share to TwitterShare to FacebookShare to Pinterest
Labels: Oscar Peterson on guitar