Guys often ask how I record my vids and how I get my sound. Well, I think the secret to a good recorded sound is going direct. It's as simple as that. No mike. No amp. I tried that often and the results are invariably inferior to my direct recordings. Of course you can use an amp modeller - I have used an old Digitech RP 300 for many years - but there's a simpler and purer way even. A good tube preamp will do trick even better! 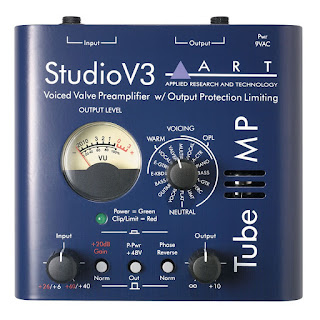 About two years ago I bought a valve preamp that sounds great. It's an ART Studio V3 preamp. Let's have a look at some info:

The Tube MP Studio V3 delivers warmth and fatness to any audio source while maintaining an exceptionally low-noise signal path. While its primary function is as a microphone preamp with +48V phantom power, variable gain and phase reverse switching, the Tube MP is also an exceptionally versatile tube driven direct box for any instrument source. The Tube MP Studio V3 uses ARV3™ presets were created and fine-tuned by some of the industry’s top studio and live-sound engineers and allow instant access to a multitude of preamp settings designed for guitars (electric and acoustic), keyboards, bass guitars, drums, vocals and more. Additionally, the Tube MP Studio V3 employs OPL™ (Output Protection Limiting) technology to protect the next component in your signal path from clipping and overloads.T’s proven V3™ (Variable Valve Voicing) Technology to instantly contour the tone to any source ...

OK, there's obviously a sales pitch going on in the above text but the bottom line is that the thing really sounds great. What you hear in the video is what it sounds like. I only added some reverb but for the rest the sound from the guitar has NOT been processed whatsoever. Best listen to the clip on a real hifi set to get an idea ... 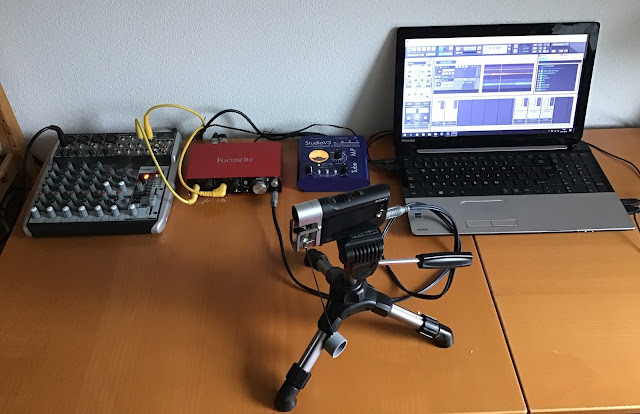 Of course you need some other tools too to be recording and you have to know how to handle recording software. I have written on that earlier here. But I kind of simplified my recording setup last week and the signal chain is now as follows:

But at the centre of my recording setup there's just this little valve preamp. No microphone or amp needed. And, like the rest of my recording gear, it's pretty inexpensive.