Pasquale Grasso: The Bud Powell of the Guitar 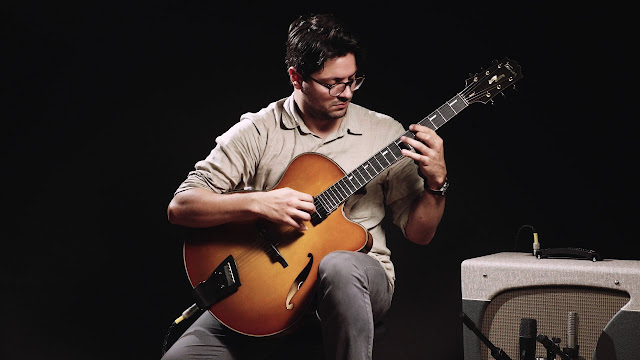 By now I take it all of you guys have heard of Pasquale Grasso. If not, hurry to Youtube and type in his name. What you will hear is, well ... Bud Powell but then on guitar. There is no guitar player that even comes close to his pianistic bebop style and to the heights he has taken solo guitar playing in that particular genre. On guitar that way of playing is unprecedented and though his style is "old school" he is still a ground breaking artist. But also his single line playing is purely pianistic and deeply rooted in the bebop style of Bud Powell. His execution and delivery are pretty unbelievable and he is a guitarist's guitarist in every aspect. Pasquale is playing Trenier guitars.


I came across his latest video in which he is playing a Bud Powell solo with the WDR Big Band. The tune is "Parisian Thorougfare." As a matter of fact, the whole original Bud Powell solo was arranged for big band ...

And here's Pasquale with the WDR Big Band:


Here's some additional info on Paquale from his own web page:


One of the most strikingly unique artists of his generation, Pasquale Grasso has undoubtedly changed the way the world views jazz guitar. Born in Ariano Irpino, Pasquale began playing guitar at a very young age. By the summer of 1997, his parents, who recognized the depth of their young son’s talent, sought out the instruction of jazz innovator, Agostino Di Giorgio. A former pupil of Chuck Wayne, Di Giorgio immediately took interest in Pasquale, whose prodigious aptitude for the instrument flourished as the young guitarist quickly became his closest pupil. From that point, it wouldn’t be long before news of this talent spread.
Barry Harris, the world-renowned jazz educator and bebop piano master, became an extraordinary influence when Pasquale attended his jazz workshop in Switzerland during the summer of 1998. Harris, contemporary of Miles Davis, Sonny Stitt, and Cannonball Adderley, took Pasquale and his brother, Luigi, under his wing. Over the span of the next 5 years, the Grasso brothers became pillars of Harris’ international workshops and were quickly promoted from mere attendees to instructors for the other students. Pasquale was named Harris' guitar teaching assistant and for the last ten years he has conducted workshops in Italy, Switzerland, France, Spain, Holland, and Slovenia.
In 2008, Pasquale pursued classical guitar studies in the Music Conservatory of Bologna under Professor Walter Zanetti. During his time at the conservatory, Grasso developed a new approach to the guitar, combining classical tradition with Chuck Wayne's modern technique ... In 2012, he moved to New York City and quickly made a name for himself in the city's vibrant jazz scene.

Posted by Dutchbopper at 6:31 AM 6 comments: