Why You Should Study That Lick

Wow dudes. It's been a while. Lately I have been working on Les Wise's book "Bebop Licks for Guitar." So I'd like to say something about licks. Every once in a while I come across someone that proudly states that he does not like studying or playing "licks" from the jazz greats. Usually the argumentation is that that is not a creative thing to do and that you should rather speak with your own voice. Let me tell why I think that is not correct from an educational point of view.

If we liken jazz to a "language" - and a scientific study from 2014 at John Hopkins |University has indeed shown that the brain areas of jazz musicians that are activated during playing are those areas that are active too while speaking - it is obvious that in order for us to learn a language we not only need syntax (grammar) but also words, phrases and sentences (vocabulary) before you can start speaking fluently. Interesting is that the grammar learning thing is completely ignored by most of us. Children are perfectly able to learn a language (and its rules) by simply imitating what they hear.

If we accept the analogy of learning jazz as learning a language the aural tradition of imitating the sounds you hear around you becomes perfectly clear:

The language analogy also expresses the importance of the aural tradition. Generations of jazz musicians learned directly from other musicians through apprenticeship and recordings. We learn to swing by imitating great musicians, just as children learn to speak by imitating their parents.

So is jazz theory (chords, scales, arpeggios, inversions, substitutions etc.) useless? Should you not just play by ear and reproduce the sounds you hear on recordings? Just like a kid learning to speak while growing up?  That's a tough question. It's perfectly possible to become a great jazz player without knowing what the heck you are doing. You don't have to know any grammar to speak a language. But the exposure to the language would have to be significant. I have seen and heard teenage gypsy kids (and this is also true for the big names in that genre) play great jazz guitar at a very young age without even knowing the name of the chords ... Such is the power of exposure.

If jazz is more of "foreign" language to you a set of rules may come in handy though. Still, running scales and knowing a lot of theory will never make you a competent player. You need words and sentences. You need real language. And that's where licks come in. And longer units such as transcribing and studying complete jazz solos by others. Preferably sing them even:

What he is saying is simply this: 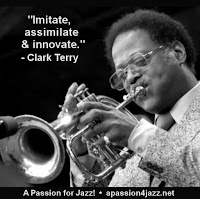 1. Imitate: Listen. Learn lines by ear. Transcribe and learn solos and licks. Absorb a player’s feel, articulation, and time.
2. Assimilate. Ingrain these stylistic nuances, harmonic devices and lines that you’ve transcribed into your musical conception. Make them your own.
3. Innovate: Create a fresh and personal approach to the music.

So what are you waiting for? Study that lick. Transcribe that solo. Steal all you can. And then move on ...

Posted by Dutchbopper at 5:38 AM