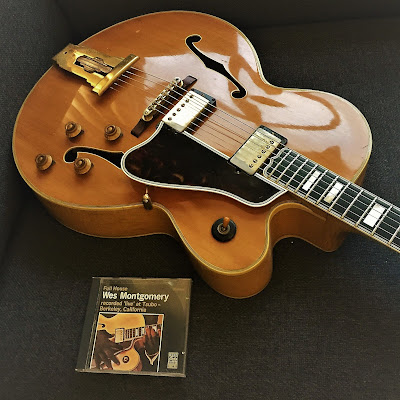 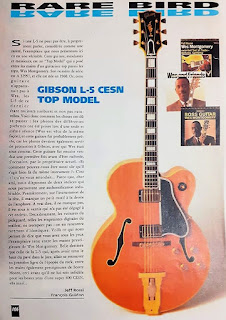 As you may recall, a few days ago I posted a story about a blonde 1960 L5 associated with Wes Montgomery that I played at the owner's house. And indeed, it was the guitar that was undoubtedly featured on at least one album cover of him, I concluded. If Wes owned it or ever recorded with it I was not sure of and I thought that was to remain a mystery. Not so! A French guitarist reacted to my Blog post with an article that had been written about the guitar in a French guitar magazine and it gave some definitive answers as to what the association of Wes with this particular guitar really was. It even stated the serial number!

So the article was in French but fortunately my French is good enough to be able to read and interpret most of it directly. If you can read French, just click on the article on the left. If not, carry on ...

The bottom line of the article is simple. Wes never owned this guitar and he therefore probably never played it or recorded with it. The guitar was provided by Gibson for a publicity shoot because Wes was under contract with Gibson and he held the guitar during ONE foto session of which the photos were used for at least 3 albums: Full House, Boss Guitar and Wes and Friends. Actually Wes is wearing the same clothes on all of the pics that you see on the different shots from this photo shoot, though the lighting of the pics may suggest otherwise ... 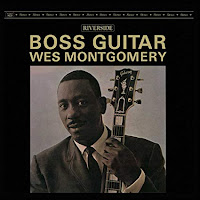 I ran the text trough Google translate and edited it where it screwed up. An interesting detail in the article is a second clue - next to the veins in the pickguard - that gives away the identity of this guitar. On the inlay of the headstock a small motif is missing, to the right of the amphora, probably where some varnish was sprayed over it. Of course the third clue is the definitive one: the serial number in the article is a match with the number on the guitar.


I was kind of puzzled by the last sentence in the article but my French friend told me it was just a joke. So mystery solved. Still, a very cool guitar huh! I played a guitar that was held by Wes indeed. 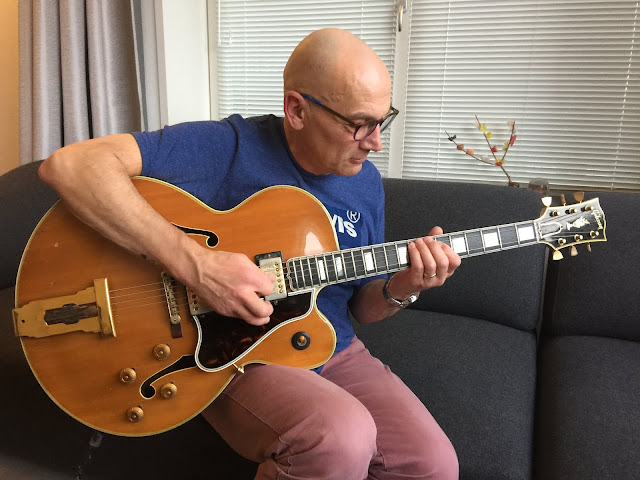 Here's the full translation of the article: 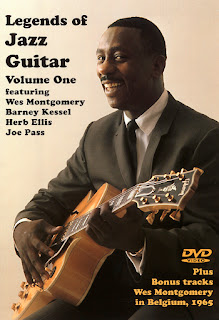 If an L-5 cannot be, strictly speaking, considered as a rarity, the copy that we present here is a real one. This guitar, ladies and gentlemen, is a “Top Model who posed in the hands of a top guitarist among the top players, Wes Montgomery." Her serial number is A 32991 and she was born in I960. However, this guitar did not belong to Wes, his L5s always being sunburst and not natural. So here's how things must have happened: the photos of the different covers were taken during one and the same session (Wes is dressed in the same way), and this guitar was probably borrowed, because the photos were also to be used as promotion for Gibson, with whom Wes was under contract. This guitar was then sold a first time before being re-purchased by the present owner."And how can you be so sure that this is the same instrument?" This is where we were waiting for you ... Because, dear friend, we have two clues that allow us to authenticate it without a doubt. First, on the inlay of the headstock a small motif is missing, to the right of the amphora. Or rather, it is not missing, it is under the varnish which has not been removed on that spot. Secondly, the veins of the pickguard, like the fingerprints of the thug, do not deceive: we rarely meet identical patterns. This is what allows us to say that you have before you the model held in the prestigious hands of Wes Montgomery. A great destiny for the L5, which, after holding the top of the hill in jazz, would be at the forefront of epic rock in the hands of the equally prestigious Scottv Moore, this before it was unfaithful to the beautiful eyes of a super 400 CESN, her too...

Email ThisBlogThis!Share to TwitterShare to FacebookShare to Pinterest
Labels: The Mystery of Wes' Blonde L5 Solved